You are at:Home»Video»Stocks, Bitcoin Aren’t As Tied as Market Thinks 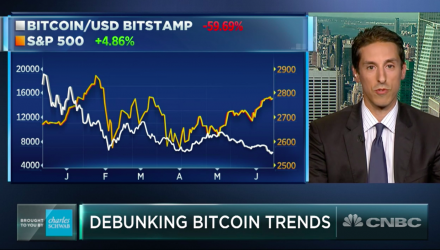 Stocks and bitcoin aren’t as tied as the market thinks – that was the key message on Thursday from Charlie Bilello, director of research at Pension Partners, on CNBC’s “Trading Nation.”

“If you look at the data, it tells you an interesting story that’s very different from what you’re hearing out there,” Bilello said. “Recently you are seeing big declines in bitcoin, and you have a number of people saying the equity markets should be going down with bitcoin.

“And they are saying that because they are looking at last year where bitcoin was up over 1,000% and it was a great year for the equity markets. And they say, well they both went up together, so they should go down together.”

Bilello said the markets did in fact see that for a brief period in January and into early February, but it hasn’t continued.

“Since then, really that relationship has collapsed. If we’re looking at from the peak last December, bitcoin is down over 60 percent and the S&P over that period of time is actually up 4 percent,” he said.

For more news on bitcoin and cryptocurrencies, visit our bitcoin category.