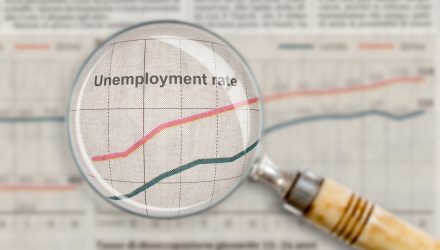 On Friday equities are trading within roughly the same range as Thursday following the March employment report, which was far worse than forecast, but was still only a narrow piece of the picture of a monumental collapse in the labor market and the loss of millions of jobs from the coronavirus shutdowns.

The U.S. Bureau of Labor Statistics released data Friday showing that Nonfarm payrolls dropped by 701,000 in March, a sevenfold increase from what was forecast, but just a dearth of the actual jobs lost, which already have shown up in 10 million unemployment claims in the second half of March.

According to the BLS, this was a historic increase in unemployment, one not seen in nearly 45 years.
“In March, the unemployment rate increased by 0.9 percentage point to 4.4 percent. This is the largest over-the-month increase in the rate since January 1975, when the increase was also 0.9 percentage point. The number of unemployed persons rose by 1.4 million to 7.1 million in March,” the report said.

The report displays the loss of 459,000 jobs in the leisure industry, one of the hardest-hit areas, portraying how fast the restaurant and hotel industry slashed employees, even prior to major state shutdown orders like in California.

“We all know things are terrible. We all know millions of people are losing their jobs,” said Peter Boockvar, chief investment strategist at Bleakley Advisory Group. “We had this sharp decline in anticipation of this news. The next batch of news we don’t know is what is the duration of this and what is going to happen in May. We hope at the end of April that we are looking at a slow reopening.”

Stocks have continued to trade down after initially treading water near Thursday’s highs, but are still within yesterday’s range. The Dow was down about 440 points around noon EST or 2.05%, while the S&P 500 and Nasdaq are down a similar percentage. Treasurys briefly sold off but recovered and the 10-year Treasury was yielding 0.57%, lower on the day.

“The bond market is dead in the water. But there’s no surprise at all about what the next report is going to be like a month from now. It’s going to be a complete disaster with job losses of depression magnitude,” said Chris Rupkey, Chief Financial Economist at MUFG Union Bank. “What do you do with this information? The stock market is maybe close to discounting this for now. The report today shouldn’t be moving the needle on anyone’s investment decisions here. … It’s hard to know what to do with this report. It should be 10 times worse right now, worse than any single month in the Great Recession a decade ago.”

Rupkey said March’s 4.4% unemployment rate could rocket past 10% in April, and economists say jobless claims could double by the end of April.

With several states now under quarantine, it will be a matter of time to see how the coronavirus can be contained and if the stimulus package can help the economy stay afloat.