You are at:Home»Featured»Stocks And Index ETFs Stalled As Stimulus Deal Stagnates 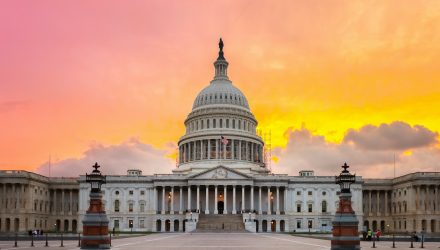 Stocks and index ETFs are mixed in Monday trading as the S&P 500 is making an attempt to once again leverage the prior week’s gain and break its Feb. 19 record high, as stimulus negotiations continue to stymie market progress.

The S&P 500 advanced 0.3% along with the Nasdaq Composite which rallied 0.7%, aided by slight gains in tech shares. Meanwhile, the Dow Jones Industrial Average is underperforming its brethren indices and fell 100 points or roughly 0.4%.

The major stock index ETFs are trading mixed to higher along with their underlying benchmarks Monday. The  Invesco QQQ Trust (QQQ) and SPDR S&P 500 ETF Trust (SPY), are both showing moderate gains while the SPDR Dow Jones Industrial Average ETF (DIA) has declined slightly, down 0.2%.

Big tech companies made marginal gains after the weekend, with Facebook, Apple, Google parent Alphabet, and Microsoft all climbing at least 0.1%, and Google gaining as much as 1.1%. The gains helped boost the iShares Expanded Tech Sector ETF (IGM) 0.79% in Monday morning trading.

The S&P 500 and Nasdaq were each completing three-week winning streaks, but are still rotating around their recent highs, struggling to break to new ground in what has historically been a tepid month for markets. As of Friday’s close, the S&P 500 was just 0.6% below 3,393.52, the intraday record set in February, unable to break the closely monitored level. Analysts are optimistic that a new high will be made, however.

“The S&P 500 is overbought into key resistance and up against seasonal headwinds,” Ari Wald, head of technical analysis at Oppenheimer, said in a note to clients. But should the market “consolidate from here, we’ll be monitoring for an accumulation of cyclical equities to confirm what we expect to be a breakout to a new high.”

Lawmakers in the Senate and House have suggested they are struggling to reach a deal on a new stimulus package as there is disagreement as to how much if any aid to include. Meanwhile, President Trump seems ready to support more stimulus.

On Friday, the president tweeted: “I am ready to send more money to States and Local governments to save jobs for Police, Fire Fighters, First Responders, and Teachers. DEMOCRATS ARE HOLDING THIS UP!”