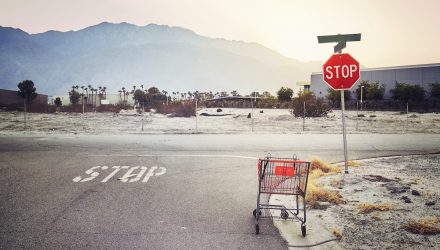 Consumer spending data showed numbers plummeted a historic 16.4% in April as Americans shelter-in-place in most states across the country, and stores were largely shuttered amid the coronavirus pandemic, according to a government report Friday.

Economists surveyed by Dow Jones projected the advanced retail sales number to drop 12.3% after March’s reported 8.3% fall already had set a record for data going back to 1992. The March numbers were adjusted to be better than the 8.7% initially reported.

Roughly 68% of the country’s $21.5 trillion economy comes from personal consumption expenditures, which tumbled 7.6% in the first quarter just as social distancing measures aimed at curbing the coronavirus started to take effect.
“You know the country’s shutdown and people aren’t buying stuff. I hate to state the obvious but this is an obvious statement in bold relief here. They’re not buying cars, down 12%, they’re not buying furnishings and home furnishings, down 58%. Clothing and clothing accessories down 78%. There’s one positive and I think just one positive: non-store retailers up 8.4%, and besides some sort of strange up and down we had in December 2018, that is the largest one month increase, and that is electronics, and that is indeed where people are buying things,” said Steve Liesman from CNBC.

The Dow Jones Industrial Average was positive briefly earlier in the morning but is currently trading down about 90 points, having lost roughly 300 points earlier in the day. The S&P 500 and Nasdaq Composite have also bounced from their lows, off 0.47% and just 0.19%, respectively.

Stock Index ETFs are somewhat red today as well, tracking moves in the benchmark stock indexes. The SPDR S&P 500 ETF Trust (SPY), is off by 0.1%, the SPDR Dow Jones Industrial Average ETF (DIA) is 0.42% lower, while the Invesco QQQ Trust (QQQ), which has held up slightly better than the other indexes recently, but is still in the red, is down 0.3%

One point to keep in mind with regard to the data is the seasonally adjusted aspect, which doesn’t assume the economy was closed down, according to analysts. Markets have the tendency to rally as data changes.

“I want to point this out because this is something we need to pay attention to in the future: these are all seasonally adjusted numbers. And that process is impaired. Because the seasonal process doesn’t assume the economy was intentionally shut down, which really does change everything. So sometimes non-seasonally adjusted may be better,” explained Rick John Santelli on the same CNBC segment.