You are at:Home»Featured»Stocks and ETFs Remain Composed after New CPI Data 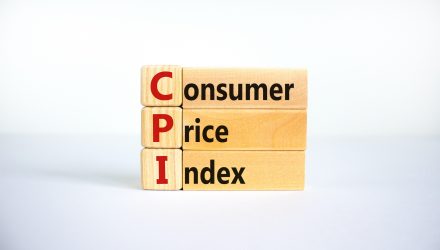 While new inflation data showed a price increase since 2020, stocks and ETFs remained relatively calm, as the move was less dramatic than investors predicted when eliminating prices from volatile products like food and energy.

July’s Consumer Price Index released Wednesday revealed that prices gained 5.4% since last year, compared to projections of 5.3%, according to economists surveyed by Dow Jones. The government said CPI increased 0.5% in July on a month-to-month basis. While the move could be worrisome for consumers, the securities markets seemed rather tepid on Wednesday.

The Dow Jones Industrial Average added roughly 0.55% and hit a new intraday record, thanks to stocks like Caterpillar and Home Depot, where consumers have been spending plenty of money since the pandemic. Meanwhile, the S&P 500 was largely unmoved by the news after an initial blip higher, and the Nasdaq Composite fell about 0.5%, as Alphabet, Amazon, and Tesla traded lower, helping to drive the Simplify Volt RoboCar Disruption and Tech ETF (VCAR) lower on the day.

Perhaps part of the reason for the lack of market movement, apart from the summer doldrums and vacation season, is that investors were focusing on the core rate of inflation, which could signal inflation will remain less of a threat than originally perceived, and that the economy will remain robust, helping to buffer coronavirus issues.

The CPI, excluding energy and food prices, climbed by 0.3% last month, below the 0.4% increase predicted. However, core prices still popped 4.3% on a year-over-year basis.

“It’s encouraging to see the pace moderating a bit month over month supporting the notion that recent price increases are transitory and reopening related,” said Mike Loewengart, managing director of investment strategy at E*TRADE Financial. “So while inflation continues to run hot, it’s likely that investors are already pricing it in.”

Rampant inflation has been a concern for investors and analysts, who worry that the Fed may need to change policy earlier than expected, which could affect the stock market.

The Fed has been targeting 2% inflation as a healthy level, though it is prepared to allow the level average higher than usual in order to promote full employment.

Used car prices, which investors have been monitoring as a signal for explosive inflation, gained just 0.2% in July after rocketing over 10% in the prior month.

The data “should help assuage investor fears that the Fed is too laid-back about inflation pressures,” said Seema Shah, chief strategist at Principal Global Investors. “The details of the data release suggest some easing in the reopening and supply-shortage driven boost to prices, and tentatively suggests that inflation may have peaked. Investors in the transitory camp will feel slightly vindicated.”

The 10-year Treasury yield, which has been climbing recently after dropping for months, fell flat following the CPI report, relinquishing an earlier gain and trading around 1.344%. The iShares 7-10 Year Treasury Bond ETF (IEF) was unchanged as well.

“You saw this strong jobs report on Friday, you saw the 10-year [Treasury yield] move up, and you immediately saw the pop in financials. Going forward, you’re going to continue to see those strong numbers, and I think that will continue to help the net interest margins of financials stocks,” Stephanie Lang, Homrich Berg Principal and chief investment officer, told Yahoo! Finance. “As we move into later this year, I think the defensives are going to be strong, because I think there’s going to be more volatility and the earnings [comparisons over last year]are going to be tougher. We really like to have a barbell strategy where you have some of the cyclical names like financials, but have a barbell with tech names that are more secular growers and have acted more defensively.”

Another factor affecting markets on Wednesday is Biden’s infrastructure bill. On Tuesday, the Dow and S&P 500 finished at all-time highs after the Senate passed the $1 trillion infrastructure bill. The legislation sets aside $550 billion in new spending for areas such as transportation and the electric grid.

Although the bill still needs to pass through the House, investors expressed enthusiasm that the plan will ultimately be signed into law, providing further governmental support for the recovering economy.

“Realistically, what an infrastructure bill is going to mean is additional spending into the economy. Just like the stimulus has helped the economy for the last year, that’s more money that can be going into the economy and helping businesses get through the slump they have been in previously,” Courtney Dominguez, senior wealth advisor for Payne Capital Management, told Yahoo! Finance. “Generally speaking, the economy looks to be on good footing, and this is only going to be an added benefit on top of that.”

Finally, while stocks have reached record highs and driven a number of indexes to historic levels, they have been muted somewhat, as coronavirus case numbers continue to climb in the U.S. and around the world, with many affected by the more transmissible delta variant.

“Widespread vaccine distribution and distancing measures have helped limit the variant’s impact, but we could still see some drag on economic growth as some restrictions are reintroduced and consumers potentially become more cautious,” said Barry Gilbert, asset allocation strategist at LPL Financial. “While we may see an increase in market volatility due to the Delta variant, we believe the S&P 500 is still likely to see more gains through the end of the year,” he added.