You are at:Home»Featured»Stocks And ETFs Fall Again On First Day Of May Amid Poor Earnings 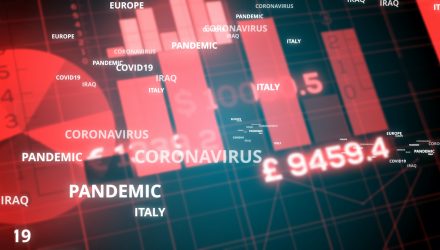 Is the old adage, sell in May and go away about to ring true for stocks? It sure looks like it from the selloff that began yesterday and is continuing ferociously Friday.

Stocks slumped early Friday, kicking off May on a down note as investors were disillusioned with earnings from big tech companies as well as President Trump’s threat to place additional import tariffs on China to compensate for its handling of the coronavirus pandemic.

“Two factors are weighing on risk sentiment. Firstly, disappointing earnings announcements/trading updates from Apple and Amazon after the close, with the latter warning of a possible Q2 loss. Secondly, an increase in tension between the U.S. and China and hints at possible additional U.S. tariffs,” said Adam Cole, chief currency strategist at RBC Capital Markets, in a note.

President Trump also said Thursday that Covid-19 was allowed to escape from a lab in China, contradicting an unusual on-the-record statement from his own intelligence community by claiming Thursday that he has seen evidence that gives him a “high degree of confidence” the coronavirus started in a laboratory. The President neglected to offer support to back up his assertion, however.

All this news has the Dow Jones Industrial Average sinking today, off by nearly 600 points, or 2.4% after closing lower yesterday as well. The S&P 500 is also dropping quickly, down 85 points, or 2.9%, while the Nasdaq Composite has dropped almost 3.4% as of noon EST Friday.

After a historically robust April move where major indexes recovered a good part of the coronavirus-inspired selloff that plummeted the S&P 500 down nearly 34% from its Feb. 19 record close to its March 23 low, stocks closed lower Thursday, having hit major technical levels, and achieved an overly complacent VIX, which had reached lofty highs roughly a month ago and fallen since.

To be sure, many analysts have been championing a pullback in equities, feeling that this move higher has moved too quickly.

“Beware of the oddity in this bear rally,” Andrew Lapthorne, global head of quantitative research at Societe Generale, said in a note Thursday. “Given the overall negative undertone from the economic challenges ahead, the dramatic reversal of global markets after the pandemic lows is more puzzling.”

From a technical standpoint, the market seems poised for a pullback again, analysts would argue. The S&P 500 has reached a key 61.8% retracement level, according to Fibonacci analysis, gauge technical analysts use to predict inflection points. Although it pushed through the 50% level of retracement, another key resistance, it seems as of yesterday, that the 61.8% level may be proving more of a barrier for stocks bulls.