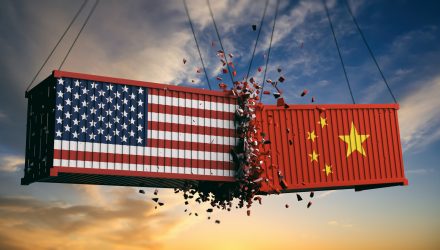 After attempting a third positive day in a row, the S&P and Nasdaq vomited within the last hour of trading, amid news that President Trump will be giving a news conference Friday regarding China.

“If the HK response involves broad sanctions against individuals or entities, that would be a larger issue and not something the SPX could easily dismiss,” said Adam Crisafulli of Vital Knowledge, in a note. Stock valuations are “too high in general and leave no room for error while investors aren’t paying enough attention to rising US-China tensions.”

In addition to the news of the press conference, technical indicators suggest stocks may be due for a significant selloff as well.

Despite a move higher earlier in the session, the NYSE’s Arms Index, also known as The Trading Index (TRIN), indicates now that market internals are showing signs of panic selling, suggesting investors may be looking to sell on the day’s rally. The TRIN is a breadth oscillator that aids in the measurement of internal market strength or weakness.

While earlier in the day there was optimism related to reopening the economy and positive economic data, there is still uncertainty as to how consumers will react, and how the market will recover.

“The greatest stimulus for the economy is a safe reopening,” wrote Gregory Faranello, head of U.S. rates trading at AmeriVet Securities. “In the end, reopening in and of itself will gradually show improvement although the true demand-side still remains unclear.”