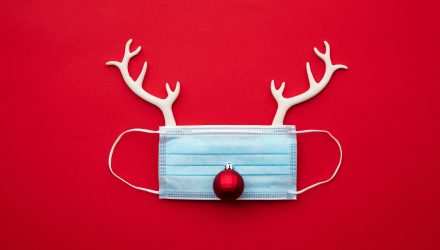 The Dow Jones Industrial Average added 0.23%, as the S&P 500 advanced 0.4%, and the Nasdaq Composite gained 0.36% on Thursday, with markets closing at 1 p.m. ET for the Christmas Eve holiday, and remaining closed Friday in observance of Christmas.

Investors are still anxiously awaiting a resolution to the ongoing battle to pass additional coronavirus stimulus, with House Republicans on Thursday denying the Democrats’ efforts to pass $2,000 direct payments. Efforts to alter the bill arose after President Trump criticized the $900 billion bill, calling it an unsuitable “disgrace” because it asks for $600 rather than $2,000 checks.

Financial experts weighed on the stimulus debacle, noting that with a new president coming, a potential veto or criticism should have little effect on stocks and index ETFs.

“Markets don’t care too much about Trump’s criticism of the stimulus bill as a formal veto is considered unlikely, [and]the joint stimulus/budget legislation passed both the House and Senate with veto-proof majorities,” Adam Crisafulli of Vital Knowledge said in a note. “Even if Trump were to successfully veto the measure, Biden will be president in only 27 days and can sign it then.”

While benchmark indexes are still positive for the year, the S&P 500 recorded a 0.2% loss this week amid profit-taking actions and policy uncertainty. Meanwhile, the 30-stock Dow was essentially flat, making a 0.1% gain for the week, and the Nasdaq added 0.4% this week.

With just a handful of trading days left in 2020, the Nasdaq appears to be the undisputed winner, as Big Tech rescued the economy during the precipitous drop due to the pandemic in March, and the index currently added more than 42% on the year. The Dow and S&P 500 are up 5.8% and 14.6%, respectively.

One index that has been on fire lately is the Russell 2000, which added another 1.6% for two months of consecutive gains, making it the longest weekly winning streak since Feb. 2019. The move has helped boost ETFs like Vanguard Russell 2000 ETF (VTWO).

Investors are still also observing progress on the vaccine rollout, as the CDC said the vaccine has now been given to more than one million people as of Wednesday, a figure that is 19 million doses short of earlier projections from public health officials for December.