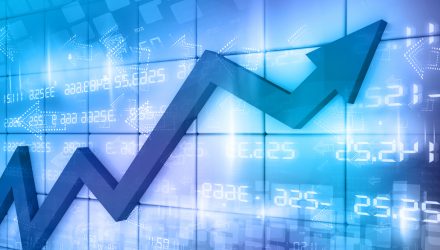 The major stock index ETFs are also broadening their gains along with their underlying benchmarks to close the week out, as the SPDR Dow Jones Industrial Average ETF (DIA), SPDR S&P 500 ETF Trust (SPY), and Invesco QQQ Trust (QQQ) are all climbing as of 115PM EST. The iShares Core S&P 500 ETF (IVV) gained over 0.83% Friday as well.

Index futures and ETFs have been fluctuating in momentum based on tweets posted by President Trump, and stocks notched fresh highs after the president tweeted: “Covid Relief Negotiations are moving along. Go Big!” This was a sharp contrast from a message Tuesday from the president, stating that any type of substantial new bill would be tabled until after the election.

Despite struggling earlier in the week then, the benchmark indexes and stock ETFs are headed for healthy weekly gains. The Dow has climbed 3.4% this week, and is set to score its largest weekly gain since August. Meanwhile, the S&P 500 and Nasdaq have added 3.8% and 4.3%, respectively, for the week.

“Stimulus talks are really dictating the market action on a day-to-day basis,” said Keith Buchanan, portfolio manager at GLOBALT. Buchanan noted that the recent rhetoric indicates some progress in the negotiations, but added it is key for Washington to move “quickly” on the matter to “to relieve the pressure that the economy is under.”

Stimulus appears to have been successful at invigorating investors however. The Federal Reserve and Congress have invested trillions of dollars to maintain the economy amidst the pandemic. Such measures have included the Fed initiating an open-ended bond-buying program and President Trump signing a $2.2 trillion package that offered additional unemployment benefits and direct payments to Americans.

“If you look at stock prices, I think some of them are ridiculously high but going short on them proves to be a very, very expensive operation,” Carl Icahn, billionaire investor and chairman of Icahn Enterprises, said Thursday night  at the 13D Monitor Active-Passive Investor Summit. “A lot of those stocks you believe are tremendously overpriced just keep going up. So basically, I think the stimulus is doing the trick.”

“At this juncture, I’m net long because I believe that this stimulus is coming and it’s going to continue, especially after the election,” he said.

Health developments are also helping to spur investors into buying more stock, as GenMark Diagnostics said after the close Thursday that the FDA provided the company with an emergency clearance to run a test that screens for the flu, coronavirus and other viruses. A study at Gilead also revealed that remdesivir cut recovery time in comparison to a placebo, helping to boost the company by 1.7%, as well as the iShares Nasdaq Biotechnology ETF, which counts the stock among its holdings.