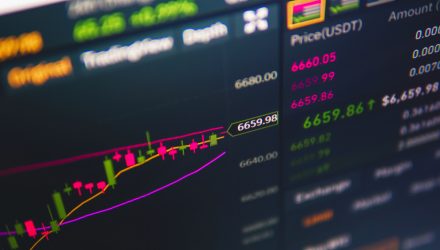 Stocks and index ETFs are trading near the prior day’s highs Wednesday, as investors prepare to receive the breakdown from the Federal Reserve’s last policy meeting later this afternoon.

In another narrow-range day, the Dow Jones Industrial Average traded slightly lower, while the S&P 500 added 0.1% and the Nasdaq Composite slipped 0.1%.

Travel and leisure stocks and ETFs such as those related to airlines and cruise lines continued to be favored by investors. Carnival climbed 3.6%, while Royal Caribbean and Norwegian Cruise Line advanced more than 2% each, while the The First Trust Consumer Discretionary AlphaDEX Fund (FXD) fell slightly. Meanwhile, Southwest American Airlines and United both rose over 1%, while the U.S. Global Jets ETF (JETS) declined.

Financial pundits like JPMorgan Chase CEO Jamie Dimon was sanguine that the U.S. economic comeback from the pandemic could be smoother than expected, noting in his annual letter to investors released Wednesday that, “I have little doubt that with excess savings, new stimulus savings, huge deficit spending, more QE, a new potential infrastructure bill, a successful vaccine and euphoria around the end of the pandemic, the U.S. economy will likely boom. This boom could easily run into 2023 because all the spending could extend well into 2023.”

Meanwhile, as investors for the Federal Reserve minutes today, many are cautiously watching bond yields, which have continued to pull back from recent record highs. The 10-year Treasury yield slipped to 1.65%, its lowest level since last month.

The FOMC will release the minutes from its March meeting, where the central bank chose to leave interest rates unchanged, on Wednesday. The minutes could offer investors guidance on the future direction of rates.

“There are lots of reasons to be excited about the months ahead, and we’re generally optimistic for this year,” noted Lindsey Bell, chief investment strategist at Ally Invest. “Stocks’ momentum is strong, no doubt about that. But the market may be ready to take a breather as investors digest all the good news, determine how much of that is priced in and weigh it against uncertain risks like inflation,” she added.

Stocks and index ETFs rallied strongly last week, and have been attempting to maintain those gains, thanks to robust economic data such as March’s jobs report. All three major benchmarks are coming off their fourth straight quarter of gains as investors appear to be looking toward a light at the end of a tunnel.

The view was supported by the International Monetary Fund on Tuesday, as the fund broadened its 2021 growth outlook for the global economy to 6%, up from January’s forecast of 5.5%. The organization noted that “a way out of this health and economic crisis is increasingly visible.” However, it added that there still could be “daunting challenges” given the inconsistent nature of the global vaccine rollouts.

“From a positioning standpoint, we still view equities as attractive on a relative basis,” noted Keith Lerner, chief market strategist at Truist. “Even though we expect periodic setbacks, U.S. stocks have risen 85% of the time during economic expansions, and valuations remain attractive relative to fixed income.”