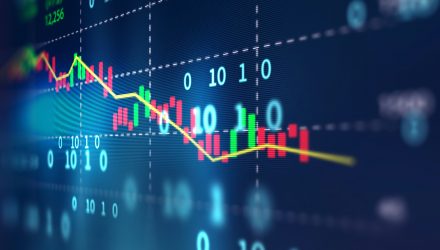 Stocks and stock index ETFs were mixed to lower on Wednesday as bond yields climbed again. Stocks related to an economic recovery helped steady the market.

Major stock ETFs are mixed on Wednesday as well. The SPDR Dow Jones Industrial Average ETF (DIA) is up slightly, while the SPDR S&P 500 ETF Trust (SPY) and Invesco QQQ Trust (QQQ) are both lower just after 11:15 AM EST.

Investors remain relatively unnerved by the move in interest rates, as the 10-year Treasury yield extended its gains yet again, causing a drop in bond prices, which run inversely to rates. The benchmark rate increased over 8 basis points to 1.49% Wednesday, broadening concerns about equity valuations and a potential increase in inflation.

“One of the fundamental underpinnings of strong equity performance the last six to nine months has been very low yields. And yields are not as low today as they were just a few weeks ago,” Eric Winograd, AllianceBernstein senior economist, told Yahoo! Finance.

“When we think about how that yield move will play out, the bond market takes a staircase up. You get sharp moves up and then a period when it moves sideways and consolidates, and then another sharp move higher. So I think we should expect that basic pattern to repeat a handful of additional times over the course of the next few quarters,” Winograd added.

Meanwhile, President Biden announced late Tuesday that the U.S. should have a sufficient supply of Covid-19 vaccines to vaccinate every adult in the nation by the end of May, pushing up the prior date by two months.

“While the S&P 500 may be facing structural head-winds due to tech weakness, much of the rest of the market is actually doing quite well,” Tom Essaye, founder of Sevens Report, said in a note. “Overall, most non-tech stocks are weathering the increase in bond yields quite well.”

Investors and markets were also affected by economic data, which revealed that private companies added 117,000 new jobs in February, according to a report Wednesday from payroll processing firm ADP. Economists polled by Dow Jones had projected a higher figure of 225,000.

In addition, the level of growth in the services segment of the U.S. economy fell in February, with the ISM Non-manufacturing Index revealing a reading of 55.3 for last month, down 3.4 percentage points from January and beneath the 58.7 Dow Jones estimate.