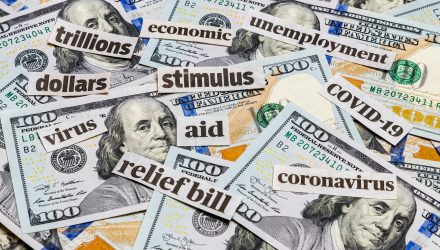 Stocks and index ETFs are dropping on Friday following President-elect Joe Biden’s announcement of details relating to a nearly $2 trillion stimulus plan, as well as the poor retail sales data.

Although they are attempting to rebound in the late morning session, the Dow Jones Industrial Average and the S&P 500 lost 0.8% Friday, while the Nasdaq Composite fell 0.7%.

After recent gains, energy, financials, and materials were the worst-performing sectors in the S&P 500, leading to a slump in the Energy Select Sector SPDR Fund (XLE), which is down over 3% Friday. For the week, all three of the major averages have given up over 1%.

The S&P 500 alone added over 8% in the last several months with rates gaining over projections of a substantial stimulus package under Biden.

Tom Essaye, founder of The Sevens Report, said the proposal was “being met by a ‘sell the news’ reaction as markets already priced in most of what was included.”

Biden’s proposal, called the American Rescue Plan, involves ramping up federal unemployment payments to $400 per week and extending them through September, offering direct payments of $1,400 to many Americans, and lengthening the federal moratoriums on evictions and foreclosures through September.

The plan is also designed to bolster state and local governments by offering $350 billion in aid as well as $70 billion for Covid testing and vaccination programs. It will also boost the federal minimum wage to $15 per hour.

“There is real pain overwhelming the real economy — the one where people rely on paychecks, not investments, to pay for their bills and their meals and their children’s needs,” Biden said during a speech in Delaware Thursday night.

“Plans for future historical stimulus, easy Fed policy and vaccines are now well known, and as such those catalysts simply don’t have the positive influence on stocks that they have over the past few months,” he added.

Although the plan is ambitious, there is still doubt over how Congress will react to Biden’s proposal. Despite holding a majority in both houses, Democrats still need to convince moderate members of their own party, and even some Republicans to boost spending.

CNBC’s Jim Cramer said that notorious investor David Tepper has a positive view on stocks amid the news.

“I don’t want to say he’s wildly bullish. I would say he’s very constructive,” Cramer said Friday on “Squawk on the Street.” “He saw this coming. He knew to get out and now he feels there are pockets where you should be in, pockets of very reasonable valuations.”

Yet, markets may be slipping Friday due to other developments, such as the U.S. Commerce Department releasing data showing that retail sales declined 0.7% in December. Economists polled by Dow Jones projected sales to stay unchanged.

In addition, while major banks such as JPMorgan Chase, Citigroup, and Wells Fargo reported better than expected earning, their stocks were sold by investors and traders, driving the SPDR S&P Bank ETF (KBE) 2.68% lower.