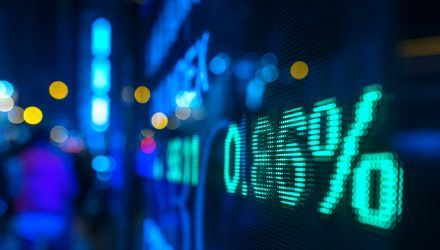 Stock ETFs Start May on the Front Foot

Stocks and index ETFs started the first trading day of May on an upswing, as investors drove most sectors higher in Monday morning trading.

The Dow Jones Industrial Average added almost 1%, while the S&P 500 climbed 0.6%. The Nasdaq Composite advanced 0.4% before slipping back into negative territory amid losses from Amazon, Tesla, Facebook, and Netflix.

Major stock ETFs are mixed to higher on Monday as well. The SPDR Dow Jones Industrial Average ETF (DIA) and SPDR S&P 500 ETF Trust (SPY), are both climbing, while the Invesco QQQ Trust (QQQ) is off on the day, as of noon EST.

Earnings are still on investors’ minds, and Berkshire Hathaway stock gained 1% after Warren Buffett’s enterprise said it captured a 20% increase in operating earnings and continued to repurchase significant portions of its own shares. Buffett also revealed that when he steps down, Greg Abel, vice chairman of all non-insurance operations, will take over the reigns. The move helped fuel the Absolute Core Strategy ETF(ABEQ), which holds an almost 9% position in Berkshire, higher.

Despite Friday’s stock decline, the S&P 500 managed to score its third straight month of gains in April, adding over 5% to the index as investors remain sanguine about the economic recovery process. The key benchmark is now up 11% for the year. Meanwhile, the Dow added about 2.7% last month, while the Nasdaq Composite soared 5.4% in April.

Yet, with stocks close to all-time highs, some investors are leery that the new month may lead to the old adage “sell in May and go away.”

Data going back to 1928 shows that the May-October period has the lowest average and median returns of any six-month period of the year, with the S&P 500 up 66% of the time on an average return of 2.2%, according to Bank of America.

“This is a small number of observations, but May-October has lackluster average and median returns after a November-April rally of at least 20%,” Stephen Suttmeier, technical research strategist at Bank of America, said in a note.

Other analysts agree, adding that stocks are priced well, but that earnings may have peaked.

“I think the market is priced almost to perfection, right? We’ve priced in a good vaccine rollout. We’ve priced in a strong reopening to the economy. I’m a little concerned about the second half of the year,” Allan Boomer, Momentum Advisors Chief Investment Officer, told Yahoo! Finance. “I think it’s possible that in the short term, earnings have basically peaked and … this is a great quarter, but I don’t know that the rest of the year will be quite as strong.”

There may be reason to look for more gains however, as IHS Markit data revealed that U.S. manufacturing activity increased at a record-high speed last month, with April’s Manufacturing Business Activity PMI Index climbing to 60.5, meeting predictions from economists polled by Dow Jones.

However, a separate gauge from Institute for Supply Management signaled a slowdown in manufacturing activities. The ISM Manufacturing PMI for April came in at 60.7, compared to the projected 65.0 and March’s level of 64.7.

“Investors are gearing up for another busy earnings week capped off with a widely watched jobs report. Given the positive economic and earnings news, the path of least resistance appears higher,” said Jack Ablin, chief investment officer at Cresset Capital.