You are at:Home»Featured»Stock ETFs Slip Amid Ongoing Political Turmoil and High Valuations 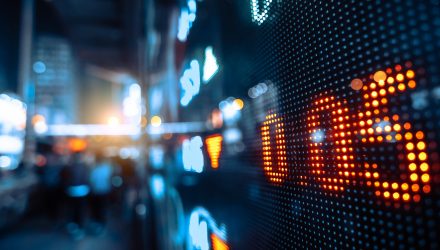 The Dow Jones Industrial Average slipped 0.23% to start the week of trading, as the S&P 500 fell 0.4% and the Nasdaq Composite dropped 0.7%. At one point, the Dow was off by over 200 points, but has recovered some losses as of noon EST.

Major stock ETFs are also struggling on Monday as well. The SPDR Dow Jones Industrial Average ETF (DIA), SPDR S&P 500 ETF Trust (SPY), and Invesco QQQ Trust (QQQ) are all lower just after noon EST.
Index ETFs had a solid performance last week as investors shook off concerns over the storming of the Capitol, instead concentrating on the prospect of additional fiscal stimulus after a Democratic sweep of Congress. The S&P 500 climbed for four consecutive days to record a 1.8% gain last week and a new all-time high. The Dow and the Nasdaq Composite added 1.6% and 2.4% in the prior week, respectively, also reaching fresh, all-time highs.

There is some concern from analysts and financial pundits that markets are becoming too lofty and could be due for a pullback.

“After being bullish for several months, we are definitely becoming more cautious on the stock market up at these levels,” Matt Maley, chief market strategist at Miller Tabak, said in a note Sunday. “We believe that the vast majority of the rally from the March lows is behind us…and that a correction is likely to begin at some point in the first quarter of this year.”

Although investors appear to have largely discounted the political turmoil from last week, the fallout is far from finished.

Some financial experts are underscoring the concern that markets have over the political tension.

“When you listen to the speaker of the House … basically just saying the president is the most dangerous man, you got a week of danger and the markets don’t like it,” CNBC’s Jim Cramer said on “Squawk on the Street.”

But the prospect of more fiscal stimulus has kept any significant repercussion for the stock and index ETF world at bay for the time being.

“The advance is built on three main pillars: strong corporate earnings, massive stimulus, and vaccine optimism,” Adam Crisafulli of Vital Knowledge said in a note on Sunday. “Stimulus expectations are getting elevated – Biden’s plan may be worth several trillion dollars on paper, but what actually gets passed will probably be much smaller.”