You are at:Home»Featured»Stock ETFs Slip After Solid Performance Monday 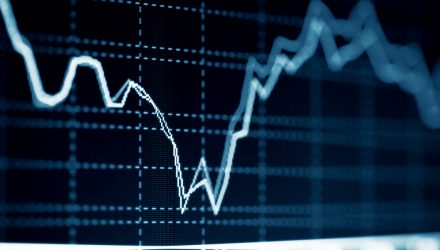 After a solid performance Monday, the Dow Jones Industrial Average has still yet to reach its February peak, and with a slump on Tuesday, the index is pulling the other indices and corresponding stock ETFs down with it as well, as Apple shares fell for the first time in almost a week of trading sessions.

The Dow Jones Industrial Average dropped 150 points, or 0.7%. The S&P 500 and Nasdaq Composite were just below breakeven, with the Nasdaq attempting to stay positive.

The major stock index ETFs are trading mixed to lower along with their underlying benchmarks Tuesday. The SPDR Dow Jones Industrial Average ETF (DIA) is lower while the SPDR S&P 500 ETF Trust (SPY) and Invesco QQQ Trust (QQQ) are struggling to remain positive, with the Nasdaq succeeding as of noon EST.

Apple slipped 1.9%, relinquishing some of its feverish climb into a record valuation, but other key tech stocks were one of the few bright points in the market Tuesday morning, with gains made in Facebook, Alphabet and Microsoft, helping to boost the iShares Expanded Tech Sector ETF (IGM) 0.49%.

While the Dow has yet to reach its all-time highs, the other major bellwethers have continued to outperform, and the S&P 500 notched another record high after China and the U.S. resumed trade talks earlier.

“Equity investors continue to express cautious optimism on the direction of the economy and progress with the virus,” said Mark Hackett, chief of investment research at Nationwide. “Investor sentiment has shifted, with substantial optimism now embedded into the equity markets, driving valuations to the highest level since the technology bubble.”

In a statement, the Office of the U.S. Trade Representative noted that both countries made “progress and are committed to taking the steps necessary to ensure the success of the” phase one trade deal. The two countries also “addressed steps that China has taken to effectuate structural changes called for by the Agreement that will ensure greater protection for intellectual property rights,” the statement said.

There has been significant tensions between the two rivals, with the U.S. upset with how China has managed the coronavirus outbreak within its borders.

There is some positive news on the coronavirus front, however. The number of freshly confirmed coronavirus infections in the U.S. has fallen. Based on data culled from Johns Hopkins University, new cases dropped to around 38,000 and have been below 50,000 since mid-August.

Aneta Markowska, Chief Economist at Jefferies, noted that high-frequency data on the coronavirus reveals economic movement in the U.S. is increasing as the current month ends.

“The reopening of schools is proving to be a positive catalyst, with back-to-school shopping on track to exceed last years’ levels. We also show early/tentative evidence of improving labor market trends in states where schools reopened in early August,” Markowska said in a note.