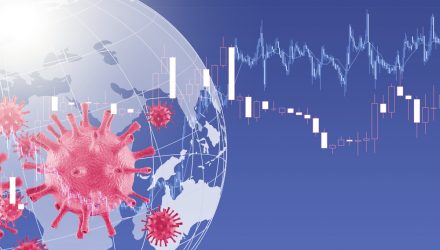 Stocks and index ETF are sliding on Wednesday, as investors digest the continuing legislative stalemate over additional fiscal stimulus.

After climbing over 100 points earlier in the day, the Dow Jones Industrial Average slipped 0.48%, as the S&P 500 dropped 0.81%. The Nasdaq Composite tumbled by 1.77%, weighted down by underperforming tech stocks like Amazon.

Apple was one of the the worst-performing Dow components, falling 1.4%, along with Microsoft, which dropped a similar amount. The iShares Global Tech ETF (IXN), dropped more than 1% as well.

“The US fiscal stimulus process has turned somewhat acrimonious, but Congress has another 1.5 weeks to try and reach a compromise (as the budget deadline is about to get pushed” to Dec. 18),” said Adam Crisafulli of Vital Knowledge.

Currently, over 200,000 Americans are testing positive for Covid-19 every day on average, according to an analysis of Johns Hopkins University data by CNBC. The United States has witnessed a staggering 1 million fresh cases in half a week, bringing the country’s tally to more than 15 million.

Despite the rapid spread of the infection, investor concerns about the latest surge in coronavirus cases have been mitigated by Pfizer’s U.K. vaccine rollout, which began on Tuesday.

The vaccine rollout resulted in a surge in the Dow, S&P 500, and Nasdaq on Tuesday, leading to new highs in two of the indices. Analysts also attributed this spike to the holiday effect.

“Covid is raging and still no stimulus package? Never mind, with vaccinations already underway, it may be impossible to keep this stock market from rising through the holidays,” Jim Paulsen, chief investment strategist at the Leuthold Group, told CNBC.