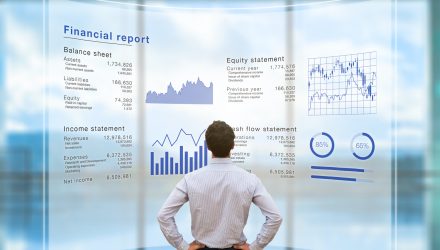 The S&P 500 and Dow Jones notched fresh highs on Wednesday as investors took in the first release of robust corporate earnings.

The Dow Jones Industrial Average popped 0.62% to score an all-time high, thanks to moves in bank stocks like Goldman Sachs. The S&P 500 added 0.2%, and was also able to chart new high territory. Meanwhile, the Nasdaq Composite dipped 0.13%.

Major stock ETFs are mixed on Wednesday like their benchmark counterparts, with the SPDR Dow Jones Industrial Average ETF (DIA) and SPDR S&P 500 ETF Trust (SPY) making gains, while the Invesco QQQ Trust (QQQ) is down 0.55% just before 1 PM EST.

Bank stocks have been outperforming on Wednesday, with shares of Goldman Sachs advancing 4.7% after the bank smashed analysts’ expectations for first-quarter net profits and revenues, thanks to robust performance from the firm’s equities trading and investment banking divisions.

Meanwhile, JPMorgan Chase also bested analysts’ projections on top and bottom lines, buoyed by a $5.2 billion benefit from releasing money it had previously delineated for loan losses that didn’t emerge. Shares of the bank fell 1% despite the news however.

Is a More Optimistic Earnings Season Ahead?

“The first wave of Q1 big bank results look pretty much as strong as most analysts had expected – even stronger actually,” said JJ Kinahan, chief market strategist at TD Ameritrade. “It’s possible that we’re in a powerful market that’s in a forgiving mood when it comes to bad news. The path of least resistance for stocks continues to seem to be to go higher, with the market climbing a wall of worries that just doesn’t go away.”

For S&P 500 companies overall, analysts are projecting a spike in corporate profits as compared to last year, thanks to an improving economic situation and strong consumer spending that should lift companies’ results.

“We could see upwards of 30% year-over-year earnings growth in the first quarter. That would be the most we’ve seen since coming out of the financial crisis,” Ryan Detrick, chief market strategist at LPL Financial, told Yahoo Finance.

“That bar is a little bit higher, but we think once again corporate America will step up and justify a lot of the valuations that we see here,” he added.

After a rough day on Tuesday, some reopening stocks bounced back from previous pullbacks. Travel stocks like American Airlines gained 2%, while United Airlines rallied almost 3%, helping to boost the U.S. Global Jets ETF (JETS) over 1% Wednesday.

The Food and Drug Administration halted the administering of J&J’s coronavirus vaccine after six people in the U.S. developed a rare disorder related to blood clots.

The news was counterbalanced by reassurances from other drugmakers. Pfizer CEO Albert Bourla announced the drugmaker can provide 10% more vaccine doses to the U.S. by the end of May than previously anticipated, while Moderna said its coronavirus vaccine was over 90% effective at protecting against the virus six months after a person’s second shot.