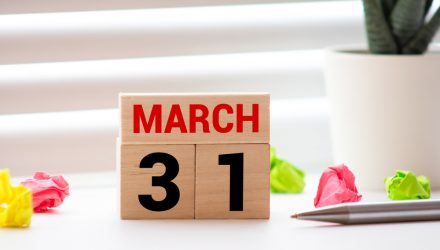 Stock ETFs Rally into the Final Day of the Quarter

The S&P 500 advanced 0.77% to a fresh intra-day high while the Nasdaq Composite jumped 1.9% amid a decline in bond yields and climbing technology stocks. Meanwhile, the Dow Jones Industrial Average traded near breakeven.

Investors are anxiously awaiting President Biden’s details on a massive infrastructure spending package on Wednesday. The plan would be funded by a 28% increase in the corporate tax rate, according to an administration official Tuesday night. The White House said the tax hike, along with measures aimed to prevent the offshoring of profits, would fund the infrastructure plan within 15 years.

With recent spikes in bond yields, once positively viewed economic stimulus may now be examined with more skepticism.

“Economic stimulus is no longer 100% virtuous in the eyes of the market,” Tom Essaye, founder of Sevens Report, said in a note. “That’s because it will bring with it 1) Higher yields, 2) Rising inflation expectations and 3) Erosion of the idea that the Fed will be on hold for the entirety of 2021. Additionally, all this stimulus is being used to offset and usher in tax increases on individuals, corporations and investments.”

Wednesday also ushers in the end of March as well as the end of the quarter, setting markets up for potentially more volatile trading as pension funds and other sizable investors rebalance their portfolios.

With just hours left in March, the major indexes are still positive, with the Dow and the S&P 500 having gained 6.9% and 3.9%, respectively, month-to-date, on pace for their fourth positive month in five. For the first quarter, the two benchmarks have added 8% and 5.4%, respectively, on track for their fourth positive quarter in a row. The Nasdaq meanwhile has been more muted, gaining only 1.2% for the quarter.

“The economic restart, fueled by additional fiscal stimulus and a high consumer savings rate, should be a positive catalyst for US growth – but much of this is already in the price,” said Gargi Chaudhuri, head of U.S. iShares markets and investments strategy at BlackRock.

On the data front, private payrolls in March grew at the swiftest rate since September 2020 with companies adding 517,000 workers for the month, according to a report Wednesday from payroll processing firm ADP. Next up, investors will look for the key March jobs report on Friday to determine the state of the labor market recovery. Economists project that 630,000 jobs were added in March with the unemployment rate dropping to 0.2% to 6%, according to Dow Jones.

The stock market is closed for the Good Friday holiday, as investors and traders settle in for the Easter holiday and long weekend.