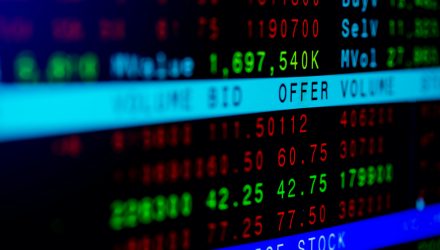 Stocks and index ETFs are rallying on Thursday after a steep sell-off on Wednesday, in which the S&P 500 and the Dow Jones Industrial Average tumbled to levels not seen in months.

After a more than 100 point drop on Wednesday, the S&P 500 advanced 1.6%, fueled by health care and utilities stocks. Meanwhile, the Dow Jones Industrial Average gained or 1.81%, as the Nasdaq Composite added as much as 1.0% before recoiling a bit.

The market plummeted on Wednesday, with the S&P 500 and the Dow recording their biggest one-day losses since October, driven lower by speculative buying in heavily shorted stocks like GameStop. There is now concern that hedge funds under pressure to cover short positions could have to limit their equity holdings to raise cash. Some see this scenario leading to a bubble in the market.

GameStop, the conventional video game retailer, has been a favorite on the WallStreetBets Reddit chat room, as investors have successfully driven the stock over 300% higher. On Wednesday the surging stock sank over 20% in a Bitcoin-like display which included multiple trading halts. The stock started tumbling as rumors of broker restrictions began to spread, with outfits like Interactive Brokers and Robinhood curbing transactions for heavily shorted names like GameStop and AMC Entertainment, which also plummeted 50% after rocketing a massive 300% in the previous session.

GameStop exploded over 1,300% in January alone as green traders piled into the stock and call options to generate massive short squeezes in the gaming retailer’s stock. Currently, the stock is still the most shorted name in the market, with 120% of its float shares sold short, according to FactSet. The moves have been driving key holders of the stock like the Wedbush ETFMG Video Game Tech ETF (GAMR), which is down almost 10% as well on Thursday.

Trading volume surged amid the retail stock buying spree on Wednesday, with 23.7 billion shares changing hands, marking it the heaviest trading day since at least 2007. On Wednesday, U.S. equity option volumes notched a record 24.5 billion shares and 57.1 million contracts, according to Piper Sandler.

“Short squeezes causing implosions in some hedge funds are joining SPACs, IPOs, and bitcoin as data points supporting a market bubble thesis,” Scott Knapp, chief market strategist at CUNA Mutual Group, said in an email. “This is a time for caution for investors.”

Meanwhile, American Airlines jumped over 15% after the carrier released quarterly results that generated optimism among investors. The news also drove short covering in AA however, as hedge funds and short sellers were forced to buy shares to limit their losses. American Airlines is the most shorted U.S. airline, according to FactSet. The news helped drive the U.S. Global Jets ETF (JETS) up 3.32%.

While GDP gained at a 4.0% pace in the fourth quarter, slightly below the 4.3% expectation from economists surveyed by Dow Jones, the number of first-time filers for unemployment benefits rose less than expected last week, also helping to buoy stocks on Thursday. Jobless claims totaled 847,000 for the week ended Jan. 23, according to a Labor Department report Thursday. Economists polled by Dow Jones had projected first-time claims to be 875,000.