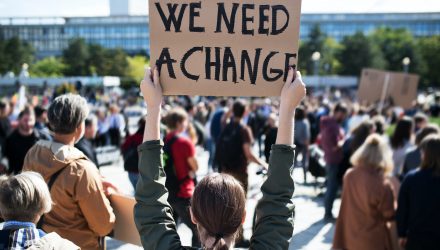 Stocks are climbing back toward the highs made Friday following a sharp move down in the overnight session on Sunday, as investors attempt to reconcile the rampant looting and destruction that erupted from protests over the George Floyd killing, with optimism over the country reopening.

The Dow Jones Industrial Average has advanced 0.37% Monday after declining in overnight trading. The S&P 500 and Nasdaq have been on a similar path, with those averages adding 0.52% and 0.82% respectively as of roughly 130pm EST.

While some parts of the country witnessed peaceful protest, much of the U.S. was mired in looting and damage to stores, something especially stressful for small business owners who are attempting to recover losses following regulations that have closed stores to curb the spread of the coronavirus.

Fox News reported damage in New York, just one of the many states affected, showing nearly two dozen stores destroyed, defaced or burglarized, as looters robbed the shops while throwing debris at news crews and littering the streets with discarded shoeboxes and various textile goods.

Health officials are warning that huge protest gatherings where people are in close proximity will likely intensify the coronavirus outbreak, which could inflict further pain on an economy that has already been suffering for months, as schools and businesses across the country have been shuttered in an effort to keep people home and stem the spread of the virus.

The coronavirus has now infected more than 1.7 million people across the U.S. and killed a minimum of 104,383, according to Johns Hopkins University data.

“I think there’s going to be a lot of challenges coming out of the events of the past week,” former Food and Drug Administration Commissioner Dr. Scott Gottlieb said in an interview on “Squawk Box” on Monday.  “One of them’s going to be that probably chains of transmission will have gotten lit by large gatherings. I don’t think there’s really a question about that.”

While the states worst affected by Covid-19, such as New York and New Jersey, have been able to curtail the outbreak thus far, Gottlieb said Minnesota’s is “expanding” with a growing number of hospitalizations.

“If you were out protesting last night, you probably need to go get a Covid test this week,” Atlanta Mayor Keisha Lance Bottoms said Saturday at a news conference. “There is still a pandemic in America that’s killing black and brown people at higher numbers.”