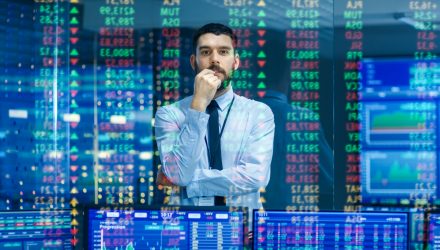 Tech behemoth Apple is fueling a drive in the Dow, gaining nearly 4% following news that Nikkei will augment iPhone production by roughly 30% in the first half of 2021. The move is also helping to buoy the Vanguard Information Technology ETF (VGT) over 1% on Tuesday.

Meanwhile, tech and energy were outperforming sectors in the S&P 500, gaining 1.2% each, with the SPDR S&P Oil & Gas Exploration & Production ETF (XOP) adding over 1% as well.

The Latest On Stimulus Negotiations and Initial Vaccinations

Lawmakers are still attempting to agree on a fiscal stimulus package, but House Speaker Nancy Pelosi invited congressional leaders, including Senate Majority Mitch McConnell, to consider government funding and coronavirus relief options, after a bipartisan group of lawmakers sent a proposal for another round of economic relief on Monday evening.

The coronavirus pandemic continues to ravage the nation and the globe, but a stimulus deal could arrive as investors and Americans at large grapple with current anemic growth and jobs data.

The first round of vaccine shots developed by Pfizer and BioNTech were given in the U.S. on Monday, just as the country crested over 300,000 deaths from coronavirus, according to data from Johns Hopkins University. Hospitals across the nation are also grappling with a shortage of ICU beds.

Luke Tilley, chief economist at Wilmington Trust, emphasized the importance of an additional stimulus package to bolster the economic recovery and prevent issues before the vaccine can be distributed.

“With the continued rising cases and mass vaccinations still a ways out, we could see some further weakness in jobs and even a flattening where we’re not even adding jobs at all … that’s absolutely a possibility for this next jobs report,” Tilley said. “And if we were to not get another stimulus package, you’re going to have 10 to 11 million people fall off the unemployment rolls right away, and that would hit spending as well.”

Investors also found some optimism on Tuesday as the FDA said the data on Moderna’s coronavirus vaccine met expectations for emergency use, a key step prior to a full approval.

The push higher in stocks and index ETFs comes after downward consolidation, where stocks were mixed-to-lower on Monday as the S&P 500 and Dow both dropped. The 0.4% decline for the S&P 500 was its fourth-straight red day.

Despite the benchmarks’ recent decline, the three major indexes are trading near record highs, having spiked dramatically after a tumultuous drop earlier in the year. David Waddell, chief investment strategist at wealth advisory firm Waddell and Associates, notes that seasonality may be in play as well.

“We may have already gotten a little bit of a Santa Claus rally,” Waddell said. “So normally the markets would accelerate from here into year-end, and they may again, but the run has been such a strong one, I wouldn’t be surprised, and actually I’d rather, if the market consolidated its gains a little bit.”