You are at:Home»Featured»Stock ETFs Rally on Inauguration and Corporate Earnings News 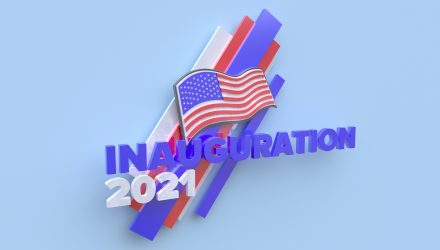 Stocks and index ETFs are gaining momentum for a second day on Wednesday, amid the inauguration of President Joe Biden and robust corporate earnings reports.

The Dow Jones Industrial Average added almost three-quarters of a percent in morning trading, while the S&P 500 gained 1.3% to notch a new intraday record. Meanwhile, the Nasdaq Composite popped 1.8% to hit a new record, aided by a surge in Netflix.

Netflix rocketed over 16% thanks to stronger subscriber growth and potential share buybacks. The streaming media company handily beat estimates for global paid net subscriber additions, reporting 8.5 million versus the 6.47 million analysts anticipated, and predicts it will balance out on a cash flow basis this year. The news helped buoy Disney 2% and the Invesco NASDAQ Internet ETF (NASDAQ: PNQI) 2.97%.

Morgan Stanley gained as much as 2% after earnings and revenue beat estimates on excellent trading and wealth management results.

“We’re off to a pretty solid start to earnings season,” said Chris Larkin, managing director of trading and investing product at E-Trade Financial. “What’s more encouraging is the positive guidance companies are projecting. So despite some inevitable bumps in the road, traders and corporate America alike are starting to see the light at the end of the tunnel.”

Investors were also hopeful for a coronavirus relief package as Joe Biden was inaugurated as the 46th president of the United States. The optimism was further driven by Janet Yellen, Biden’s designated nominee for Treasury Secretary, who on Tuesday supported additional aid spending, pushing lawmakers to “act big.”

In addition to plans for additional stimulus, Biden also revealed a broad-based agenda to combat the pandemic, which includes a nationwide vaccine campaign to hasten the rollout, as the U.S. was well under its goal of vaccinating 20 million individuals by the end of 2020. Currently only 12.3 million people have received the vaccine.

“I think we’re all beleaguered. I think an orderly transfer of power, coupled with a well-defined plan to give us vaccines as they roll out, will make it so this market can go up tremendously,” CNBC’s Jim Cramer said on “Squawk Box” Wednesday. “Everything else, I’m not saying it’s irrelevant but you can’t get this economy open until we’ve figured out how to get the vaccines from Pfizer and Moderna into our arms.”

“I believe we will be able to turn the page,” said Hooper. “I expect markets to continue to move in expectations of a robust recovery later in 2021 when vaccines are broadly distributed.”