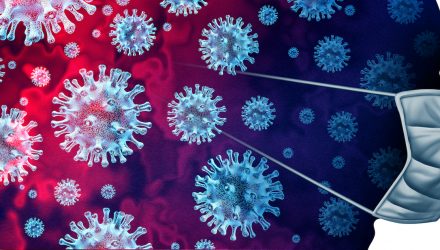 Stocks and index ETFs are plummeting Monday amid surging coronavirus infections and stalled negotiations for a pre-election, fiscal stimulus package.

Still unable to reach their prior highs, markets could be making a double top, as the Dow Jones Industrial Average tumbled nearly 1000 points lower, or more than 3.3%, and is targeting its largest one-day decline since June 11. The S&P 500 dropped 2.7%, while the Nasdaq Composite fell 2.7%. Monday’s losses annihilated the monthly advances for the Dow industrials.

The major stock index ETFs are also dropping precipitously Monday along with their underlying benchmarks, with the SPDR Dow Jones Industrial Average ETF (DIA), SPDR S&P 500 ETF Trust (SPY), and Invesco QQQ Trust (QQQ) are all tumbling as of 11:45 AM EST. The iShares Core S&P 500 ETF (IVV) lost over 2.78% Monday as well.

The stock market drop arrived amid a fresh explosion in coronavirus cases in the United States, where over 83,000 new infections have materialized on both Friday and Saturday following outbreaks in Sun Belt states, beating a previous record of roughly 77,300 cases set in July, according to data from Johns Hopkins University. The data also revealed that there was an average of 68,767 cases per day over the past week, which was a record.

Investor sentiment also declined after White House chief of staff Mark Meadows expressed Sunday that the U.S. will fail to gain control of the pandemic, especially with the burst in new cases.

“To me, this is Phase 2 of the pandemic,” said Frank Rybinski, chief macro strategist at Aegon Asset Management. “Until we get some eradication of the virus, it’s going to be like a gray cloud” over the market. Rybinski added his firm has been “reducing risk” from its portfolios in recent months.

Aside from the pandemic news, investors are still worried that the White House and Republicans may fail to reach a stimulus deal with Democrats before the election. Meadows and House Speaker Nancy Pelosi shifted blame to each other in separate interviews. White House economic advisor Larry Kudlow also told CNBC’s “Squawk Box” that the pace of talks had decreased, but noted they are still ongoing.

Now some stock analysts are predicting a sizable decline in stocks as a result.

“The market is likely to drift lower near term (first SPX support at 3,209) in the face of Stimulus disappointment … virus resurgence, and intensifying election uncertainty,” said Julian Emanuel, strategist at BTIG.

After a promising rally earlier in the month, October is seeing nearly a complete reversal in what is the final trading period before Nov. 3. Major stock averages are now showing only marginal gains for the month, but the S&P 500 and the Nasdaq climbed more than 3% so far, while the Dow gained roughly 2% for the month.

Other analysts see a more modest decline, if any, unless news gets significantly more dire.

“Based on the action in the stock market we’ve seen over the past two weeks, it seems to us that it will take some serious new-news to fuel a significant decline over the next week and a half,” Matt Maley, chief market strategist at Miller Tabak, said in a note on Sunday.