You are at:Home»Featured»Stock ETFs Move Higher After News Of Possible Coronavirus Treatment 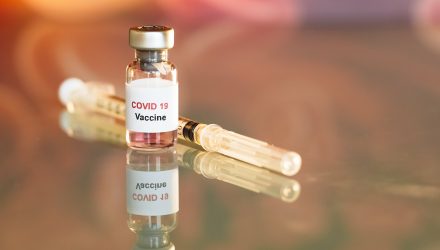 Gilead shares rocketed 12% after STAT news reported that a Chicago hospital treating coronavirus patients with Remdesivir in a trial were improving quickly from severe symptoms. The publication cited a video it retrieved where the trial results were mentioned.

“This is obviously good news. Of course, we’ve heard a few other pieces of good news like this recently and they didn’t pan-out as well as people had hoped,” said Matt Maley, chief market strategist at Miller Tabak, in an email. “The big question is whether it’s going to be enough to help the economy ‘re-open’ more quickly than people are thinking right now.”

“To me, the critical issue is employment,” Maley added. “If the economy can bounce back quickly enough to take the unemployment rate back into the low-single digits quickly, that’s going to be very bullish.”

Stocks finished the day positively and have continued their gains in post-market trade after languishing throughout the session. Part of that late day push came despite fresh data revealing another rise in jobless claims and on growing concerns over a poor first-quarter earnings season.

More than 2.1 million cases of the coronavirus have been confirmed worldwide, including over 650,000 in the U.S., according to Johns Hopkins University, prompting state governments to institute stay-at-home orders, essentially closing the global economy.

Yet after the precipitous downdraft stocks endured starting in February, the market has climbed higher and higher since March 23, even as new cases of the virus continue to mount, 22 million Americans have lost their jobs, and retail sales marked their biggest fall on record last month.

Despite all that, the S&P 500 has ascended over 25% while the Dow has gained 26.6% in that time, with the Federal Reserve helping by slashing rates to zero and stabilizing credit markets, and Congress passed a stimulus plan.

Investors and analysts have continued to tout the need for an effective treatment or vaccine in order for stocks to mount a sustainable comeback. Could this new drug be the one?

“If it is effective in keeping someone from contracting the virus or, more likely, simply reduces its severity, that would be a game-changer and [would]allow the economy to restart both more quickly and more fully,” said Jim Paulsen, chief investment strategist at The Leuthold Group, about the Remdesivir trial report.