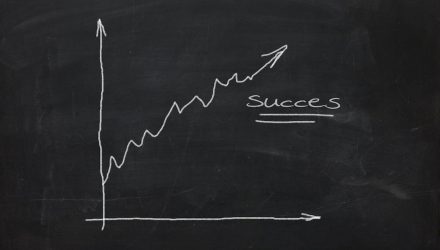 All three major stock market indexes are helping to lift index ETFs on Thursday after the Federal Reserve released a new program that could moderate interest rates for a longer period of time.

The Dow Jones Industrial Average gained 0.9%, after struggling recently, with the gains lifting the index into positive territory for 2020. Meanwhile the S&P 500 advanced 0.6% to hit 3,500 briefly for the first time ever, as the Nasdaq Composite continued its historic run higher with marginal gains.

Maintaining inflation at 2% has been a goal of the bank for some time, as they view it as a healthy rate of appreciation for the economy. But since the financial crisis, inflation in the U.S. has often fallen behind the Fed’s target.

Analyst Jim Cramer of CNBC was shocked and elated by the Fed’s announcement.

“This is incredible,” said Cramer on the announcement. Powell basically said ”‘we’re going to let things run. And we’re not going to be a part of the equation until the economy actually does even better than we think.’”

Powell also suggested that unemployment data can maintain lower levels for a longer duration before the Fed starts thinking about raising rates, which led to a decline in short-term yields and gains along the long end of the yield curve, sending 30 year Treasury bond prices tumbling, in what may be a technical breakdown finally.

“The claims data this week is encouraging,” said Thomas Simons, money market economist at Jefferies, in a note. “We were concerned that the restoration of $400 of the $600 enhanced benefit that had expired at the beginning of August was leading to more claims being filed again as people chose to receive unemployment insurance rather than work if they had flexibility in their situations.”

“The decline this week suggests this is not the case,” Simons said.