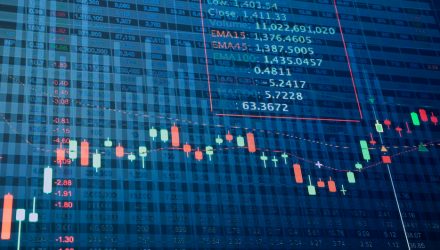 Stocks and index ETFs rallied to fresh all-time highs on Thursday after critical market components reported healthy earnings and the latest economic data indicated a rebound in consumer spending and the jobs market.

All three stock indexes traded in the green on Thursday. The Dow Jones Industrial Average advanced 0.85% to hit an all-time high, while the S&P 500 gained 1% to also score an intraday record. The Nasdaq Composite led all three indexes, gaining 1.26%.

Bond yields fell, helping key technology companies like Netflix, Facebook, and Alphabet to climb over 2% each. Amazon, Microsoft, and Apple all added at least 1%. The 10-year Treasury yield fell 9 basis points to 1.54%.

Key economic data was also a boon for stocks and index ETFs, as retail sales spiked 9.8% in March, thanks to additional stimulus that led to consumer spending, the Commerce Department reported Thursday. The latest retail sales number smashed the Dow Jones estimate of a 6.1% gain.

In addition, a report on Thursday revealed that first-time filings for unemployment insurance fell to the lowest level since March 2020. The Labor Department reported 576,000 new jobless claims for the week ended April 10. Economists polled by Dow Jones predicted a total of 710,000.

Amid several days of grinding gains and sideways price action, the stock market has continued to score fresh records, amid the economic reopening, vaccine rollout, and trillions of dollars in stimulus. The S&P 500 alone has advanced roughly 10% in 2021, with energy and financials leading the way.

“I am incredibly bullish on the markets, and you are right to be worried about our deficits,” Larry Fink, BlackRock CEO, said in an interview on “Squawk Box.” “If we don’t have economic growth that is sustainable over the next 10 years — our deficits are going to matter and they are going to elevate interest rates … I believe because of monetary stimulus, fiscal stimulus, cash on the sidelines, earnings, markets are okay. Markets are going to continue to be stronger.”

“We expect a strong rebound in growth in the second half of the year driven by vaccines, by improving virus trends, and the opening of the service sector,” Wilmington Trust’s Rhea Thomas told Yahoo Finance. “All of those will come with a rebound in consumer demand that will push inflation higher as well as interest rates.”

Although the market has been making steady gains since March, Michael Pearce, senior U.S. economist for Capital Economics, said in an email Thursday that, “Spending will almost certainly drop back in April as some of the stimulus boost wears off, but with the vaccination rollout proceeding at a rapid pace and households finances in strong shape, we expect overall consumption growth to continue rebounding rapidly in the second quarter too.”