You are at:Home»Featured»Stock ETFs Fall on Johnson & Johnson Vaccine News 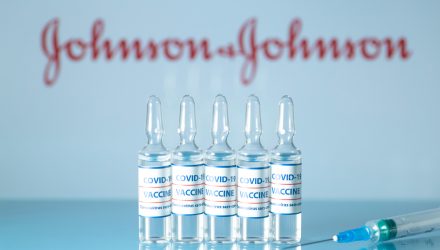 After a respite on Thursday, stocks and index ETFs tumbled once again on Friday after a trial result from Johnson & Johnson’s coronavirus vaccine disappointed some investors. Fears about a retail trading battle between smaller and larger investing players continued.

The Dow Jones Industrial Average, S&P 500, and Nasdaq Composite have all lost more than 2% on Friday, as nearly all of the market sectors are red, as investors run for perceived safe havens like silver.

While there has been significant hype around the highly efficacious studies for the Moderna and Pfizer vaccines, which have been rolling out over the last couple of months, JNJ said its one-dose vaccine demonstrated a more tepid 66% effectiveness in protecting against the coronavirus.

The effectiveness of Johnson and Johnson’s vaccine varied based on location. The vaccine was 72% effective in the United States, 66% in Latin America, and 57% in South Africa after a month, the company said. Meanwhile, the vaccine provided complete protection against coronavirus-related hospitalizations. Disappointed investors sold the stock, causing shares of JNJ to decline 3.6% and contributing to a loss in the iShares U.S. Pharmaceuticals ETF (IHE).

In addition to vaccine news, fear over increased speculative trading by retail investors and traders has been upending markets.

Shares of GameStop doubled shortly after the open after Robinhood said it would permit limited purchases of the company and other heavily sold names again, after restricting access to them on Thursday.

Investors are worried about the longer term implications if GameStop continues to surge, given its lack of fundamentals. The reverberations of the GameStop fiasco have gone so far as to involve legal action and prompt SEC investigation, generating concerns that a stock market bubble may be forming.

This drop in stocks could be good news for inverse stock ETF investors, who are thriving on Friday in ETFs like the leveraged ProShares UltraShort S&P 500 (SDS), which is up over 4.1% Friday amid the broad market decline.

“Between Washington calling for hearings and reports Robinhood was forced to not only draw down on its credit lines but also raise $1B from existing investors, the entire situation continues to erode market confidence,” Adam Crisafulli, founder of Vital Knowledge, said in a note Friday.

The market also is seeing record trading volumes as the mania continues. On Wednesday, total market volume reached over 23.7 billion shares, cresting the level seen during the height of the financial crisis in 2008. Thursday also saw extremely heavy trading with more than 19 billion shares changing hands, as the Dow tumbled 600 points on Wednesday, suffering its worst sell-off in three months.

Analysts note that markets may have entered a normal reversion to the mean cycle, which could continue for sometime as there is an attempt to realign prices with stock fundamentals.

“That smaller-cap rally would likely be destabilizing and create inefficiencies,” Christopher Harvey, senior equity analyst at Wells Fargo, said in a note. “Stocks are ultimately grounded by fundamentals – and reversions can be very painful to both the upside and the downside.”

“While we believe there is more pain to come we remain optimistic that it is likely to remain localized,” said Maneesh Deshpande, head of equity derivatives strategy at Barclays. “Market exposure of long-short hedge funds is relatively small, indicating little impact to the overall market due to deleveraging.”