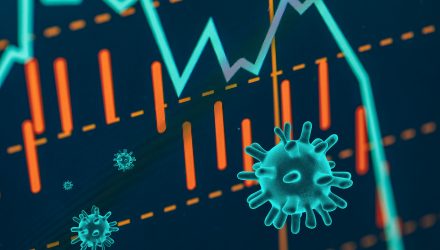 Stocks and index ETFs plunged lower from earlier highs on Wednesday, as investors scrambled out of technology stocks and Tesla.

The Dow Jones Industrial Average wiped out a 130-point advance to trade just below breakeven, while the S&P 500 dropped 1%, losing more than 50 points in a matter of minutes, as the VIX popped. The Nasdaq Composite fell 250 points and lost 0.6%, after both it and the S&P 500 notched fresh all-time highs earlier in the session thanks to optimism over corporate earnings and lower inflation data.

After remaining unchanged last month, the U.S. consumer price index gained momentum, climbing 0.3% in January, a number predicted by economists polled by Dow Jones. The move has generated some concerns of inflation among investors, which may be driving markets lower.

“One of the concerns is that inflation will start to take hold due to so much monetary and fiscal stimulus, which will cause the Treasury and the Fed to intervene,” said Keith Buchanan, senior portfolio manager at Globalt. “Any news indicates that inflation will be lower for longer will delay that potential reaction to pull some of the stimulus back.”

Corporate earnings helped to fuel an earlier climb to new highs, with stocks like Coca-Cola gaining 0.4%. The company beat analysts’ projections for its Q4 earnings and curbed its expenditures. Under Armour surged over 7% thanks to robust digital growth. Twitter spiked about 9% after the social media giant outperformed analysts’ estimates.

GM announced on Wednesday that it earned $6.4 billion in 2020, a marginal loss from the year before, thanks to increasing sales of pickup trucks and sport-utility vehicles in the latter half of the year,

“G.M.’s 2020 performance was remarkable by any measure, and even more so in a year when a global pandemic caused companies around the world — including G.M. — to temporarily suspend manufacturing,” Mary Barra, the company’s chief executive, said in a letter to shareholders.

Markets could be in for even more volatility Wednesday, as investors and traders are still awaiting Federal Reserve Chairman Jerome Powell’s speech before The Economic Club of New York at 2:00 p.m. ET, which is typically a market mover.

While investors have driven markets higher throughout the month so far, there is still some concern that vaccine efforts are too sluggish, as a number of new strains of the coronavirus have surfaced.

“The virus is continuing to mutate, vaccines are taking longer than expected to distribute and achieving herd immunity seems as if it will take a lot longer as a result,” said Chris Zaccarelli, chief investment officer for Independent Advisor Alliance. “On the bright side, massive fiscal stimulus and an extremely accommodative Federal Reserve should keep equities moving higher while we wait for those setbacks to be resolved.”