You are at:Home»Featured»Stock ETFs Fall as Covid-19 Cases Continue to Surge 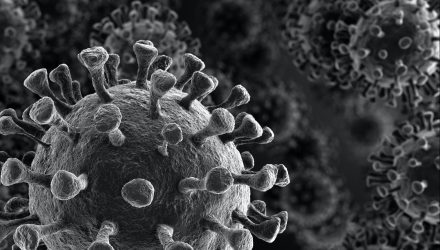 Stocks and index ETFs are falling on Thursday, as markets continue to face headwinds after making substantial gains earlier in the week. U.S. coronavirus cases continue to climb.

The Dow Jones Industrial Average slipped 140 points, or 0.48%, while the S&P 500 lost 0.41% and Nasdaq Composite is treading water near breakeven.

The SPDR Dow Jones Industrial Average ETF (DIA) and SPDR S&P 500 ETF Trust (SPY) declined slightly on Thursday, after a robust weekly performance that echoed their underlying indices throughout most of Monday’s trading.

While over the least couple of days there appeared to be a strong rotation into stock that would benefit from an economic boom, such as airline and cruise-operators, those same stocks fell broadly on Thursday, with tech and healthcare stocks gaining slightly amid a large collection of red sectors.
The U.S. Global Jets ETF (JETS) shed 0.35%, as United Airlines and Delta lost 1.1% and 0.2%, respectively. Meanwhile, Southwest dropped 1.4%.

The Invesco QQQ Trust (QQQ) was one of the three benchmark indexes to remain positive in late morning trade, as the Nasdaq Composite added 0.47%, buoyed by names like Facebook and Amazon, which had marginal gains, before dropping into the start of the afternoon session.

Thursday’s decline arrived as the number of coronavirus cases is surging. 144,000 infections were confirmed in the U.S on Wednesday alone.

“With several of the early November catalysts out of the way, the market does appear to be expressing concern with some of the near-term COVID trends which have seen the US report record case counts and eight consecutive days of over 100k new cases,” said Yousef Abbasi, Global Market Strategist at StoneX, in a note.

On Monday stock ETFs rally after an announcement from Pfizer and BioNTech that the companies’ coronavirus vaccine appeared to be more than 90% effective in its phase three trial. The news also came on the heels of a robust election week of trading.

Then on Wednesday, Moderna released news that its phase-three trial had gathered a sufficient number cases of the coronavirus to enter the early results into an independent safety monitoring board.

Analysts are now predicting a continued move higher into the end of the year, aided by an accommodative Fed and positive economic data, which is showing a decline in jobless claims.

“The Fed is going to stay in this accommodative mode for a period of time,” Rick Rieder, Head of the Global Allocation Team at BlackRock, said Wednesday on “Closing Bell.” “When you put that much stimulus in, you put that much liquidity in, and then you add fiscal stimulus … the economy will actually do pretty well.”