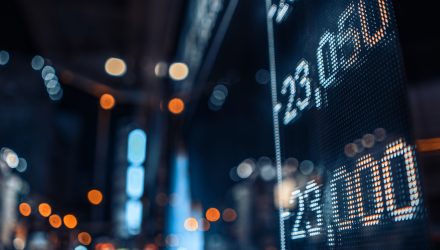 Stocks and index ETFs are trading near Tuesday’s levels on Wednesday, after a robust entry into December, which fueled the S&P 500 and Nasdaq Composite to record highs.

The Dow Jones Industrial Average traded around breakeven or slightly higher, along with the S&P 500. Meanwhile, the Nasdaq Composite retraced its steps by 0.2%.

After rumors of the move filled the news recently, Dow constituent Salesforce said it will purchase Slack for $27.7 billion after the bell on Tuesday, creating what will be the cloud software vendor’s largest deal ever. Shares of Salesforce fell 7% after the bell, while the iShares Expanded Tech-Software Sector ETF (IGV), which holds the company, declined also.

“The potential for fiscal stimulus in the lame duck session does appear to be on the rise, but any package that will be considered will likely be significantly smaller than the $1 trillion that had been talked about prior to the election,” said Yousef Abbasi, global market strategist at StoneX.

News of the new aid package bolstered the major indexes on Tuesday.

November was the best month for stocks in over 30 years, thanks to vaccine news from several pharmaceutical companies. The Dow improved by over 11% in November, reaching its best one-month performance since January 1987. The S&P 500 and Nasdaq Composite advanced 10.8% and 11.8%, respectively, for their strongest monthly gains since April.

“The beginning of Covid-19 vaccinations is getting close, bringing ‘buy on any dip’ to the forefront,” said Jim Paulsen, chief investment strategist at the Leuthold Group. “After a weaker Monday session, Tuesday brought investors looking for an opportunity to increase risk-on exposures. Activity was further boosted today by bond yields rising in concert with a stronger stock market adding to optimism that recent economic momentum may remain healthy despite the winter Covid-19 case surge.”

Despite the continued vaccine optimism, Federal Chair Jerome Powell referred to the economic outlook as “extraordinarily uncertain” on Tuesday, indicating that more aid may be coming.

On the data front, private payrolls were also lower than projected, gaining 307,000 in November, according to ADP. Economists polled by Dow Jones were anticipating 475,000 private jobs were added in November, compared to the 365,000 added in October. The number was also the lowest since July. The Labor Department’s monthly jobs report is coming later this week.