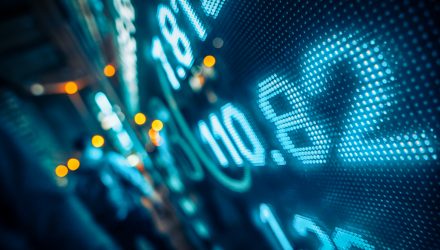 Stock ETFs Dip After An Explosive Election Week Of Gains

Stocks and index ETFs closed the week slightly lower on Friday, following a robust initial election response and weekly run-up in stocks that occurred despite of a still undecided presidential election and a surging number of coronavirus infections. Analysts predict that stocks may be more tepid in the week ahead however, as investors continue to monitor election developments.

The S&P 500 rallied soared over 7.3% in the past week, tagging 3,509, urged by technology stocks and the Nasdaq Composite, which surged 9% to gather the best weekly performance since April. While stocks dipped on Friday, technology, communications services, health care, and discretionary stocks carved out some significant gains this week.

The presidential election has been the most impactful news this week, and remains unresolved heading into the weekend, given that even if Former Vice President Biden is declared the president-elect, close votes and lawsuits will most likely generate recounts. Even control of Congress remains tentative, as Senate appeared to be under Republican control, but runoff elections are needed for two Senate seats in Georgia, still one of the closest undecided races in the country, in early January.
Although longer-term prospects for stocks seem robust, with election tensions running high, some analysts are concerned that stocks may languish next week.

“I think the uncertainty is going to catch up the market on a short-term basis,” said Leo Grohowski, BNY Mellon’s Wealth Management Chief Investment Officer. “Perhaps next week could be a drifting lower kind of week.”

“I think next week is just setting up to be a breather. There’s still a lot to figure out here,” said Grohowski. “The equity market’s reaction has been I think understandable and probably better than many might have expected.”

Grohowski noted that such market uncertainty may be prolonged if events such as recounts continue to drag on. “What I’m thinking about is the Senate races. Part of the market reaction has been relying on this divided government.” After the votes are all in or recounted, “a sweep is unlikely but possible.”

“I think the longer this stays uncertain and messy, the more the post-election bounce comes into question,” he said.

Yet, historically, a dip in the stocks and index ETFs has happened before, and may be nothing to worry about according to analysts.

The market may have anticipated some rising tensions, says Sam Stovall, Chief Investment Strategist at CFRA. Still, Stovall does not see a disruption akin to the 2000 election, when former Vice President Al Gore lost to George W. Bush in a narrow race that ultimately was decided by the Supreme Court.

“In 2000, they were not expecting hanging chads. But they do expect a contested election this time. I think in many ways the market anticipated this,” said Stovall.

And so, after its election-week surge, stocks and ETFs could pull back, says Stovall.

“Historically, the market goes down in the month of November, after a Democratic victory,” the strategist explained. Since World War II, Democrats won the White House nine times, and the market fell an average of 0.5% in November in those years, compared to the average gain for all Novembers of 1.4%, he added.

The potentially good news for investors is that following those Democratic victories, stocks advanced 1.9% in December on average, which is better than the typical “Santa Claus rally” that spurred a 1.5% gain for all Decembers.

In addition, many investors remain on the sidelines, adding potentially more fuel for stocks if they jump into the market.