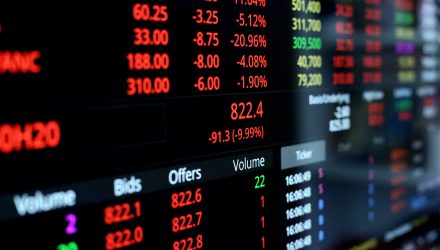 Stocks and index ETFs are losing ground on Monday thanks to fragile bank stocks that were affected by the selloff following Friday’s margin call.

Stocks like ViacomCBS fell over 5%, while Discovery slipped 1%, after the fierce selling that occurred last week. The two companies were rumored to be involved in a forced liquidation of positions held by the multibillion dollar family office Archegos Capital Management, a source familiar with the situation told CNBC. The two companies had relinquished 27% apiece during Friday’s plunge.

Credit Suisse shares tumbled 13% as the bank said it would face a “significant” hit to its Q1 results due to the bank having to exit hedge fund positions related to the forced selling.

The bank said in a statement that a “significant US-based hedge fund” failed to meet its margin commitments. It said the default affected “certain other banks” as well, though did not say who they were.

“Following the failure of the fund to meet these margin commitments, Credit Suisse and a number of other banks are in the process of exiting these positions,” Credit Suisse said.

“While at this time it is premature to quantify the exact size of the loss resulting from this exit, it could be highly significant and material to our first quarter results,” the bank added.

The news has peaked the interest of regulators, who are now observing the situation.

“We have been monitoring the situation and communicating with market participants since last week,” said a spokesperson for the Securities and Exchange Commission.

The Broader Impact May Be Muted

Bank stocks weighed on the index futures and ETFs, with Goldman Sachs down more than 3% and JPMorgan Chase off 1.4%. Meanwhile, bond yields are climbing again, after a break from the recent spike higher.

Analysts do not project a long-term impact from the Archegos situation, however.

“While other funds may be caught in the mess, we fail to see how this specific car crash of a trade ends up propagating across the financial system via counterparty default,” Bespoke said in its morning note. However, the firm did caution that investors should “get used to the GMEs and Archegos of the world, because they seem to be happening with more frequency even if their fall-out is contained.”

Meanwhile, investors are awaiting news this Wednesday regarding President Biden’s infrastructure plan, which is rumored to cost more than $3 trillion. White House press secretary Jen Psaki said this weekend that the president is set to roll out two packages in the coming months, the first covering infrastructure and the second covering health and family care.

“The market isn’t placing very high odds on this infrastructure/tax blueprint coming to fruition and while Biden probably won’t get everything he’s asking for, Congressional Democrats and the White House are VERY intent on passing some substantial bills in the coming months,” Adam Crisafulli, founder of Vital Knowledge, said in a note.