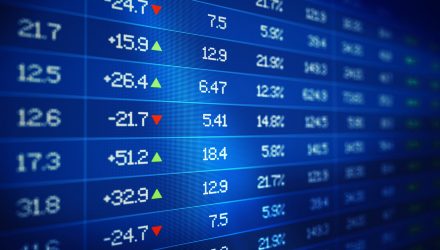 Index ETFs are mixed to lower on Wednesday, amid discouraging economic data and more muted stock movement, following the achievement of a key milestone for the Dow Jones Industrial Average on Tuesday.

The Industrial Average fell 224 points, or 0.8%, after breaking 30,000 for the first time on Tuesday. The S&P 500 also retraced its steps, dipping 0.4%. The Nasdaq Composite meanwhile traded slightly above breakeven, aided by tech behemoths like Amazon, with all three key benchmarks displaying a more anemic trading volume ahead of the holiday weekend.

The major stock index ETFs are mixed on Wednesday along with their underlying benchmarks, with the SPDR Dow Jones Industrial Average ETF (DIA) and the SPDR S&P 500 ETF Trust (SPY) falling after a considerable rally Tuesday. The Invesco QQQ Trust (QQQ) is in the green, although the iShares Core S&P 500 ETF (IVV) is slightly lower Wednesday.

Disappointing unemployment numbers restrained investor sentiment on Wednesday, as the Labor Department reported that 778,000 people filed for unemployment benefits for the first time last week. The number was significantly higher than the 733,000 initial jobless claims projected by economists polled via Dow Jones.

The Dow smashed its way through the 30,000 barrier for the first time on Tuesday, easily advancing over 400 points. The move put the index on the path for its most significant monthly gain since 1987, adding over 13%. The S&P 500, meanwhile, notched an all-time closing high as well on Tuesday, climbing 1.6%.

“The Dow passing 30,000 represents the achievement of an arbitrarily-set milestone, but it also captures the sentiment of the moment for investors,” said Scott Knapp, chief market strategist at CUNA Mutual Group.

Optimism over vaccine data has propelled stocks and ETFs to lofty heights recently, as AstraZeneca reported that an early analysis revealed its vaccine candidate had an average efficacy of 70%. This announcement arrived after similarly sanguine reports from Pfizer and Moderna in recent times.

“The recovery is intact and the world likely re-opens in the [second half of 2021], but a lot of optimism is priced in already on vaccine/recovery,” Bank of America said late Tuesday. “Vaccine execution risk, delayed fiscal stimulus and longer lockdowns are risks.”

Chris Zaccarelli, chief investment officer for the Independent Advisor Alliance, said value’s gains recently are “notable” because they come “despite the negative news flow of Covid cases surging around the country and lockdowns again being imposed in various parts of the nation.”

“A lot of future positive news regarding the economy and the virus has already been discounted,” he said. “The market can keep going higher from here … but not by too much.”