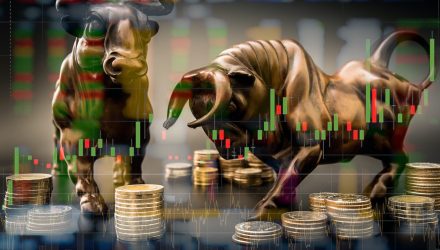 Stock indices and stock index ETFs are driving higher on Thursday after stock futures plummeted in the last hours of trading Wednesday, and into the overnight session, as the Fed Minutes stoked fears of a prolonged struggle with the coronavirus. Stocks have recovered from their worst levels, however, despite worsening unemployment numbers released Thursday.

Following a rough close to the session Wednesday, when stocks dropped precipitously into the close following the FOMC Minutes, stock indexes are attempting to claw their way back higher on Thursday. The Dow Jones Industrial Average marginally, up 05% in Thursday morning trading, while the S&P 500 added 0.19%. The tech-heavy Nasdaq Composite led the way and rallied 0.74%.

“They noted that the path of the economy would depend significantly on the course of the virus and that the ongoing public health crisis would weigh heavily on economic activity, employment, and inflation in the near term and posed considerable risks to the economic outlook over the medium term.

Investors seem to be shrugging off a poor labor report Thursday however, as stock initially fell after the jobless claims release but have rallied back strongly since then.

The tally of individuals filing for unemployment benefits last week was higher than anticipated, generating worries about the state of the economy, as lawmakers continue to grapple over a fresh coronavirus pandemic stimulus package.

“The modest jump is a stark reminder that claims will likely encounter some turbulence as they fall rather than gliding in for a soft landing,” said Daniel Zhao, senior economist at Glassdoor.

Meanwhile, lawmakers are still at odds over a new coronavirus stimulus package.

“It’s been four weeks without the $600/week CARES Act benefits for tens of millions of unemployed Americans,” said Zhao. “While a handful of states are approved to disburse the new $300/week benefits, it remains unclear how quickly the benefits will be able to flow to unemployed Americans already facing an unsteady recovery.”