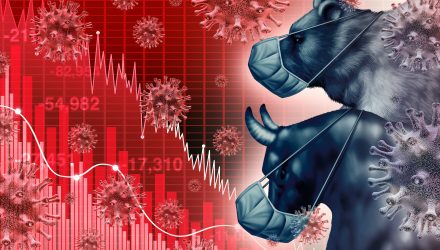 Stock indexes and stock ETFs are attempting to break lower on Friday, as the Nasdaq continues to tumble, dragging down most of the other market sectors in spite of encouraging developments in the economy, and economic data.

Markets continue their three-day selloff following a drop in Thursday’s regular session that was spurred bykey tech players like Amazon, Facebook, and Apple, which are all lower by 3% or more Friday, pushing the Nasdaq to its worst day in roughly a week.

Investors have tirelessly bid up tech stocks since late spring, catalyzing a rebound off of the coronavirus pandemic lows of March, are now reconsidering prospects of whether or not the economic rebound can persist in the wake of a still rampant coronavirus pandemic and no immediate fiscal stimulus available.

Stocks have fallen despite potentially positive economic data, which revealed that an additional 860,000 workers filed unemployment claims in the latest period, which still held below 1 million for a third straight week. In addition, continuing claims slipped below 13 million.

Markets also seemed unmoved by the FOMC meeting Wednesday, tumbling lower the day after the Fed signaled that near-zero interest rates would be steady for at least the next three years, as the US economy struggles to contain the ongoing pandemic. Fed officials suggested that the potentially early economic recovery could be damaged by a dearth of fiscal support.

Investment banks and analysts are also disheartened by the lack of fiscal stimulus so far.

“The prospects for further fiscal stimulus have dimmed further, as another week has gone by without any progress,” Goldman Sachs told clients in a research note on Friday.

“At this point, a major stimulus package before the election looks like a long shot and we expect Congress to leave at the end of September without extending the extra unemployment insurance payment, approving another round of stimulus payments, or providing additional support to small businesses or state and local governments,” the bank added.