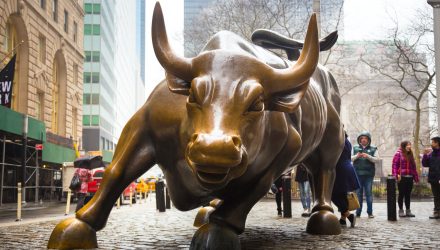 Stocks and index ETFs rallied on Tuesday amid optimism that lawmakers are making headway in negotiations for a new fiscal stimulus deal.

Tuesday’s rally arrived after the stock market suffered fell across the board during Monday’s session, with the key indices and index ETFs falling over 1% each. All 11 S&P sectors closed in the red, as stock indexes dropped for the fourth day out of five in both the Dow and the S&P 500, while it marked the fifth consecutive negative session for the Nasdaq.

House Speaker Pelosi said lawmakers on both sides had made advancements in their negotiations on a coronavirus-related stimulus package.
“Hopefully by the end of the day, we’ll know where we all are,” Pelosi told Bloomberg TV. “But I’m optimistic.”

Stimulus Sentiment Pulling Market Up and Down

“Over the next 24 hours … arguably the most important issue to watch for is a resolution on fiscal stimulus,” said Tom Lee, founder and head of research at Fundstrat Global Advisors, in a note. “While markets might see this as less significant (since a deal is likely post-election day), it is a big deal for those Americans with expiring benefits. So, we think it is very important for Washington to get a deal done.”

With a stalemate in negotiations dragging on for months, Andrew Smith, the chief investment strategist at Delos Capital Advisors, said that if lawmakers are unable to pass a stimulus deal this week, the economy could suffer, although it is unlikely it would plummet back into a recession. “We don’t believe that the new business cycle necessarily will be deterred if a stimulus deal doesn’t get done, but we do believe, if a stimulus deal on the fiscal side gets done, that will help propel the economy into that new business cycle a lot quicker than what we expect so far,” Smith said.

Moderna CEO told the Wall Street Journal that the company’s coronavirus vaccine could be ready for emergency use by December if it receives positive results from its interim trial in November.

Meanwhile, Procter & Gamble stock gained 0.5% after the company reported sales growth of 9% for the prior quarter, as earnings per share beat analyst projections.