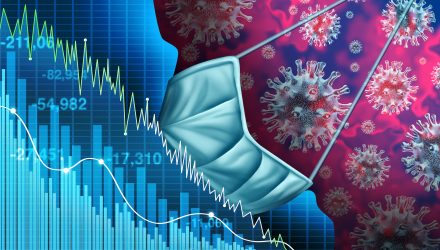 After a bloodbath on Wednesday, stocks and index ETFs are attempting to hold onto marginal gains on Thursday, as shares of some key tech companies are rallying in front of their quarterly earnings reports, scheduled for later today.

The Dow Jones Industrial Average advanced just 0.18% after losing more than 3.5% on Wednesday over fears of a burgeoning coronavirus pandemic across the global. The S&P 500 added 0.75% and, meanwhile, the Nasdaq Composite gained 1.32%, optimistic that FAANG stocks may reveal better-than-expected earnings.

Shares of Apple Facebook are making big gains, with the iPhone-maker climbing by 3.05% and the social media giant gaining 5.12%. Facebook, Apple, Google, and Amazon are set to report earnings after the bell Thursday.
Out of the over 270 S&P 500 companies have reported calendar third-quarter earnings so far, 85% have reported better-than-expected earnings, according to The Earnings Scout. However, several stocks have still been sold by investors after releasing their quarterly results, which is possibly also related to outside factors such the current pandemic and pre-election situation.

This inverse reaction is causing concern from analysts like Bob Doll, Chief Equity Strategist at Nuveen, who said on CNBC’s “Closing Bell” that the fact that a better-than-expected first half of earnings season is unable to bolster the broader market is worrisome.

“Another thing that bothers me is a lot of companies are coming out with much less-worse earnings than expected, the stocks initially go up and then they fade. Too many stocks falling on good earnings results. The market’s just tired and needs a rest,” Doll said.

Investors did receive some positive economic news that the third quarter U.S. GDP grew at a 33.1% annualized pace, which was its best pace ever. The GDP reading arrives following a 31.4% decline in the second quarter and was an improvement over the 32% estimate from economists surveyed by Dow Jones.

“Overall, the initial recovery in GDP after the first wave of lockdowns were lifted was stronger than we originally anticipated,” said Paul Ashworth, chief U.S. economist at Capital Economics. “But, with coronavirus infections hitting a record high in recent days and any additional fiscal stimulus unlikely to arrive until, at the earliest, the start of next year, further progress will be much slower.”

Other positive news came in the form of a decline in unemployment filings, as the first-time unemployment-benefits filers declined for a second straight week and hit its lowest level since March. Initial weekly U.S. jobless claims were also better than projected, with 751,000 for the week ending Oct. 24 beating the Dow Jones estimate of 778,000.

Stocks and index ETF remain fragile following yesterday’s monstrous stock sell-off, where both the Dow and S&P 500 had their worst performance on Wednesday since June. The Nasdaq also had its biggest one-day drop since Sept. 8.