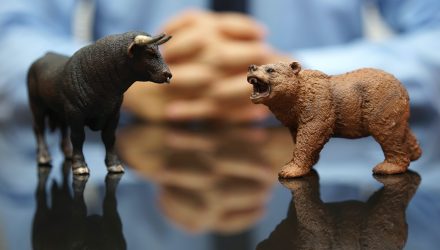 Stocks are mixed on Tuesday as traders continue to confront political and social issues around the country as they assess how the reopening of the economy during the coronavirus pandemic will unfold.

The S&P 500 has traded above and below breakeven, and is about 0.32% higher as of 1245pm, while a slide in major tech stocks like Microsoft and Qualcomm drove the Nasdaq Composite down by 0.8%, but it has since recovered some. The Dow Jones Industrial Average is leading the other indexes, having risen 0.65%.

Stock Index ETFs are mixed Tuesday as well, tracking moves in the benchmark stock indexes. The SPDR S&P 500 ETF Trust (SPY), is up by 0.27%, the SPDR Dow Jones Industrial Average ETF (DIA) is 0.54% higher, while the Invesco QQQ Trust (QQQ), is the laggard, off by 0.31%

While civil protests have been headline news over the last week, investors seem able to push aside the immediate impact to maintain a risk-on approach.

“Certainly there are a host of headline risks out there, but with some of the social unrest activities that’s something the market is looking through,” as there is only minor concern up to this point that it will affect corporate profits, he added.

Monday night witnesses additional uprisings between law enforcement and protesters as Trump threatened to dispatch troops to contain the demonstrations, claiming he would handle the problem if the individual states refused to deal with the issue.

“I am dispatching thousands and thousands of heavily armed soldiers,” Trump said late Monday at the White House. “If a city or state refuses to take the actions necessary to defend the life and property of their residents, then I will deploy the United States military and quickly solve the problem for them.”

Experts see a resumption of business activity following the months of shuttering that has resulted from the coronavirus pandemic as a key reason behind the market’s ability to shake off a number of ongoing worries, such as the tensions with China and civil unrest in the United States.

“This has largely been about the pace of the economic restart, which appears to be coming online somewhat more quickly than believed to be the case even a month or six weeks ago,” said Bill Northey, senior investment director at U.S. Bank Wealth Management.

Analysts note that this consolidation period in the market could be positive for stocks, as it has given them a chance to breathe and catch up, without dropping precipitously.

“This is a healthy reversion as you’re seeing some of the laggards come back in line,” said Jeff Kilburg, CEO of KKM Financial. “If anything, this is going to help sustain a more bullish stance in the marketplace.”