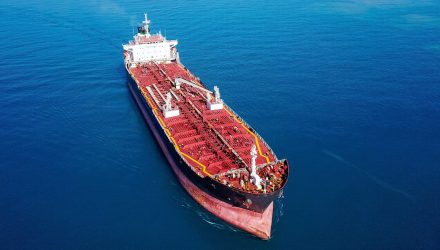 Crude oil and crude ETFs are rallying on Friday, after what has been a tumultuous week of trading, where oil product tanker rates have spiked since a giant container ship ran aground the Suez Canal on Tuesday, blocking traffic in the key shipping lane.

West Texas Intermediate crude oil is up over 4.22% on Friday, climbing $2.49 to $61.05 a barrel as of 1 PM EST. The move has helped boost ETFs like the United States Oil Fund (USO) and the ProShares Ultra Bloomberg Crude Oil (UCO), which climbed over 8% Friday.

The rates for shipping oil products in the Mediterranean region have reached almost twice their normal levels, while shipping companies have begun to redirect tankers bound for Asia away from the Suez Canal and around the Cape of Good Hope in Africa.

Experts say it could be weeks until traffic returns to normal, while nearly three dozen tankers are lined up on either side of the canal to get through, sending the rates skyrocketing in the process.

“Lower availability of tankers would lead to a short-term spike in freight rates for European and Mediterranean loadings if tankers unable to transit the canal fail to meet already agreed laycans and charterers have to opt for a flurry of prompt replacements,” oil analytics firm Vortexa said on Thursday.

“Though unlikely congestion lasts this long, if it does persists long enough to lead to diversions, longer voyage lengths and an overall increase in tonne-miles would provide further support for freight rates to rise in the short-term,” Vortexa analysts said.

Since the Suez Canal was blocked, the rate for renting some tankers for shipping oil from the Middle East to Asia has exploded by 47 percent to $2.2 million, according to Anoop Singh, a Singapore-based tanker analyst at Braemar ACM, who spoke to the Wall Street Journal.

Crude oil has been extremely volatile over the last few weeks, with the commodity attempted to test the highs of 2020, above $70 per barrel, before being rebuffed and tumbling $11. This week, oil prices have been swinging back and forth in a $4 range, and now crude prices and crude ETFs are attempting to climb higher one again.

For investors looking for crude ETFs to play the run-up in oil, the United States 12 Month Oil Fund (USL) and the iPath Pure Beta Crude Oil ETN (OIL) are two funds to consider.