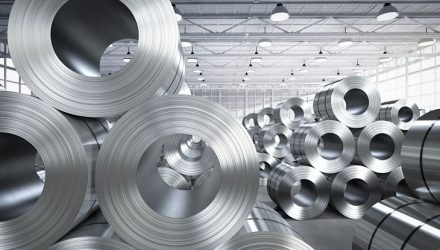 After slumping for much of the first half of this year, the VanEck Vectors Steel ETF (NYSEArca: SLX) is surging as highlighted by a gain of 16.7% over the past month. Global steel demand and production data could be behind the steel ETF’s recent rally.

“Despite contracting in June by 1.7% US steel output still grew 1.3% in H1 2017 after two years of contraction as higher prices encourage the restart of idled plants and the new Big River Steel plant in Arkansas continues to ramp up output,” reports Frik Els for Mining.com.

“Data released on Monday showed Chinese steel output last month rose 5.7% from the year before to a record 73.2m tonnes, surpassing April’s all-time high of 72.8m tonnes. For the first six months Chinese furnaces pumped out 4.2% more steel, to just under half the global total according to the World Steel Association,” reports Mining.com.