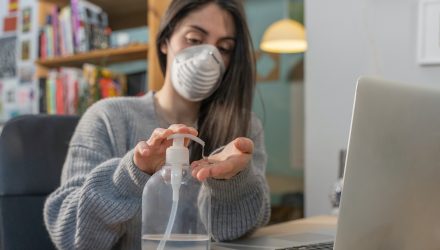 With 43 states in the U.S. and a number of countries around the world having issues stay-at-home or quarantine orders around the world, it has never been a better time to catch up on Netflix and do online shopping, for those who can still afford it.

As of Monday, there are over 558,526 confirmed cases and at least 22,146 deaths in the U.S., according to data from Johns Hopkins University.

Shares of Netflix exploded 7% higher to reach a 52-week high of $400.51 per share Monday, before settling at $396.72 per share amid concerns that the coronavirus pandemic is still rampant, as well as analyst firm Canaccord Genuity painting a rosy picture of the company’s prospects in 2020.

Netflix stock has climbed over 22% year to date, even as benchmark indices like the S&P 500, which is down 14.26% year to date and 25% off of its peak, are struggling to rally higher. The Dow Jones Industrial Average finished down 1.37%, while the S&P 500 was off by 1.01% on Monday after a long holiday weekend. The Nasdaq Composite, the lone winner in the battle of the indices, mounted a 0.48% rise on Netflix’s spike.

This surge in Netflix is in spite of concerns that the streaming service might be a luxury for many end users, and therefore one of the first things that quarantined consumers who are looking to cut expenses might eliminate during financially challenging times.

Like the popular online streaming company, Amazon, which has a streaming service of its own was up over 6% on Monday and was less than 5% from its 52-week high in early afternoon trading.

The online retail behemoth has witnessed a spike in consumers seeking supplies and groceries to tide them over during the emergency lockdowns, which is shown in part by its elevated hiring in warehouses, and continued demand for Amazon Web Services who rely to an extent on Amazon infrastructure while experiencing their own uptick in users.

For ETF users the spike in the tech companies and the prolonged quarantines are helping to lift ETFs like the Invesco QQQ (QQQ) which rallied 1% Monday amid the news and could be beneficial for others like the iShares Russell 1000 Growth ETF (IWF) and the Vanguard Growth ETF (VUG).