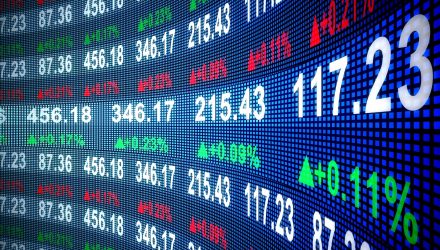 All eyes have been on the S&P 500, which once again closed lower on Thursday after attempting to breach and remain above its record high from February for the second day in a row, as traders were motivated by positive unemployment data but stymied by the stalemate in stimulus negotiations.

After briefly crossing its all time closing high of 3386.15 in the first half of the trading session Thursday, the S&P 500 fell 0.2% to 3,373.43. The other broad markets followed suit, closing below their highs, with the Dow Jones Industrial Average losing 80.12 points, or 0.3%, and the Nasdaq Composite closing off its high on the day, but advancing 0.3%, as reopening stocks struggled once again while tech was performing better. The SPDR S&P 500 ETF Trust (SPY) stumbled as well.

“We’ve had some rotation but no broadening out of the market,” said Peter Cardillo, chief market economist at Spartan Capital Securities. “If we do get that broadening out, then we do get a second leg higher in this market rally.”

“Without any significant news to lift the market, it’s going to take some time to break above the all-time high,” he said.

The market’s recovery from the March lows to reach fresh all-time highs would mark the fastest reversal from a 30% drop on record, noted Ed Clissold, chief U.S. strategist at Ned Davis Research. To accomplish such a feat however, more broad market participation would likely be needed, as many of the sectors closed in the red today, including industrials, real estate, and energy. The Vanguard Industrial ETF (VIS), SPDR® S&P Homebuilders ETF (XHB), and iShares Global Energy ETF (IXC) all closed down as well, reflecting those sector losses.

“Improvement in long-term breadth indicators would strengthen the case for further rallying, and better long-term breadth will likely require more participation from lagging Value stocks,” Clissold said in a note. But “even if the S&P 500 fails to eclipse the February record in the near term, the past six months have been historic. The question is where do we go from here?”

Data released Thursday showed that first-time claims for unemployment insurance last week dropped below 1 million for the first time since March 21 indicating that the job market may be improving.

The total claims of 963,000 for the week ended Aug. 8 were significantly under the projected 1.1 million from economists surveyed by Dow Jones, and marked a drop of 228,000 from the previous week’s sum.

“The labor market continues to improve, but unemployment remains a huge problem for the U.S. economy,” wrote Gus Faucher, chief economist at PNC Financial Services. “The number of people filing for unemployment insurance, both regular and PUA benefits, continues to steadily decline as layoffs abate. But job losses remain extremely elevated, far above their pre-pandemic level.”
For now, investors are likely awaiting the approval of a stimulus bill to gain more confidence in the market.

“The market still wants, and very much expects, an actual stimulus bill to be signed,” wrote Tom Essaye, editor of the Sevens Report.

“Looking forward, stimulus bill negotiations will continue, but [President Trump’s] executive orders (combined with recently solid data) likely reduce the urgency to get something done, so realistically the market will be looking for an agreement over the next few weeks,” he added.