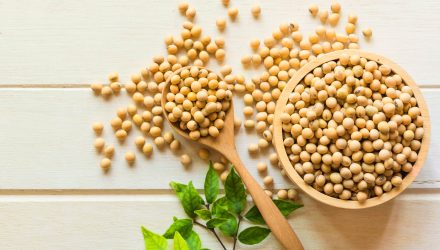 Soybean prices and a related soybean ETF have plunged over the past month on prospects of reduced exports to China in the ongoing trade war spate, but soy jumped Friday after hitting contract-lows.

The Teucrium Soybean Fund (NYSEArca: SOYB) jumped 4.2% Friday, with CBOT corn futures up 2.4% to $3.6075 per bushel, according to Bloomberg. Nevertheless, SOYB is still down about 11% since June.

“The soybean market has largely factored in Chinese tariffs. We expect Brazilian soybeans premium to rise further when the tariffs start,” according to one India-based agricultural commodities analyst, Reuters reports.

U.S. tariffs on $34 billion in Chinese imports took effect as of Friday, and Beijing vowed to respond immediately in kind. China is expected to raise tariffs on U.S. soy to a level that is expected to curb Chinese demand for U.S. shipments.

China has increased demand for Brazilian soy as an alternative, which has caused the price gap between U.S. soy and Brazilian beans to more than triple since the end of May.