You are at:Home»Equity ETFs»South Korea ETF Slump May be Short 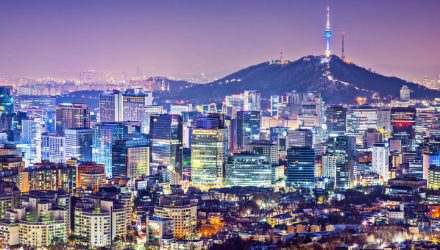 Low energy prices and cheap financing have also supported investor sentiment and positive outlook for earnings growth ahead. Tech companies, such as Samsung Electronics, are leading hopes of a turnaround in earnings. South Korea is Asia’s fourth-largest economy behind China, Japan and India and is one of the most advanced emerging markets.

“The MSCI Korea Consumer Discretionary Index of 18 companies is at a three-month low even as consumer confidence remains buoyant amid Moon’s pledge to boost spending, exposing a gap between the economy and investor sentiment on the sector. Consumption improved in June and the momentum may continue in the second half, according to the Finance Ministry,” according to Bloomberg.

U.S. officials are coordinating with their South Korean counterparts, focusing more on diplomacy and economic sanctions against North Korea, while noting that military action against the oppressive North Korean regime is not the desired course of action. Since the start of the third quarter, EWY has added $14.1 million in new assets.

Home to $3.6 billion in assets under management and more than 17 years old, EWY is one of the largest and old single-country ETFs in the U.S. This year, it is also one of the best-performing individual country ETFs as highlighted by a year-to-date pop of 24%.

For more information on the South Korean markets, visit our South Korea category.