You are at:Home»Equity ETFs»Solar ETFs Are Seeing a Dazzling Recovery 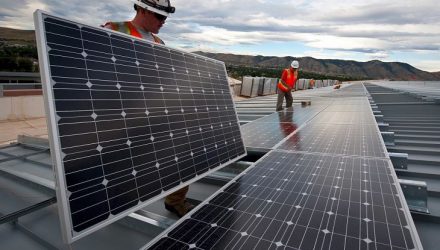 On a technical basis, solar stocks still look cheap, compared to the broader market, even after the recent rally in the solar market. The MAC Solar Index shows a median forward price-to-earning of 15.3, compared to the forward P/E of 19.0 for the S&P 500. Furthermore, the median price-to-book of 1.18 for those in the MAC Solar Index is much lower than the 3.15 P/B for the S&P 500.

On the other hand, a number of bearish factors still persist, including ongoing downward pressure on solar pricing and panel oversupply due to a hangover from solar install spikes in China and the U.S.; uncertainty over U.S. clean energy policy and global climate change initiatives under the new Donald Trump administration; concern for U.S. residential solar demand due to a shift in purchase/loans from leases and cutbacks in net metering; and trade disputes that have triggered tariffs and various market dislocations.

Concerning the ongoing political uncertainty over green policy changes, MAC Solar Index argued that the solar market has more or less absorbed the negative moves that President Trump took earlier this year, such as exiting the Paris climate agreement and moving to remove the EPA’s Clean Power Plan. Some have even argued that the President could help the solar industry ahead as Trump has hinted at potential solar installations along the planned Mexico border wall.