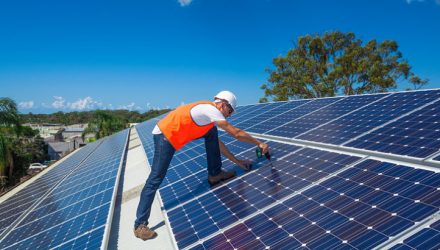 Don’t Get Burned With Solar ETFs

In what is one of the more surprising performances by an industry fund this year, the Guggenheim Solar ETF (NYSEArca:TAN), the largest exchange traded fund dedicated to solar stocks, is up 20% year-to-date. However, some traders are advising caution on the big solar ETF as the second half of the year starts.

Although TAN performed poorly during President Obama’s eight years in office, expectations were in place that President Donald Trump would present new obstacles for solar stocks. Price is what matters and price action in TAN confirms the ETF is dealing with President Trump just fine for now.

On Monday, TAN “touched a 2017 high north of $20, as traders continued to cheer the idea of a “solar wall” along the U.S./Mexico border. However, the solar sector exchange-traded fund (ETF) could run into some speed bumps soon, if recent history is any indicator, and short-term options traders can pick up TAN contracts at a relative discount,” reports Schaeffer’s Investment Research.

TAN’s year-to-date performance is all the more impressive when considering oil prices are plunging. Previously, solar stocks have risen when oil prices do the same because expensive oil renews calls for cheaper energy alternatives. TAN has not finished higher on an annual basis since 2013.