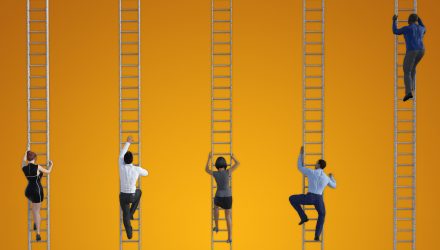 The recurring narrative in the quest for factor dominance is that value is poised to continue overtaking growth. However, a strong-than-expected third-quarter earnings season may have growth sneaking past value when 2019 is said and done.

Value equities came back in vogue when volatility was hitting the capital markets as the U.S.-China trade war and inverted yield curves injected fears of slower global growth. This caused investors to seek the safety of bonds and equities that were more value-oriented, which could blunt the impact of a market downturn.

However, as third quarter earnings roll in, major indexes like the S&P 500 and Dow Jones Industrial Average are just 1% shy of hitting new all-time highs. The Nasdaq Composite is also not too far behind–just 2% below its own all-time high.

Not too long ago, many analysts were singing the praises of a value resurgence. Per the U.S. News and World Report, “there has been at least a temporary shift in market leadership. After a decade of underperformance, value stocks outperformed the S&P in the first few weeks of September, while growth stocks lagged. While the debate rages on Wall Street as to whether this shift is temporary or an inflection point for value stocks, choosy investors can have the best of both worlds.”

From a performance perspective of this six ETFs, growth is handily beating value. However, it may still be the case that value will eventually continue an outperformance of growth, especially with an election year ahead.

“Buying growth stocks in an election year is generally ill-advised,” wrote George Budwell in Investopedia. “During the last presidential election cycle in 2016, growth stocks, on balance, dramatically underperformed the broader markets, whereas value stocks as a whole produced market-beating returns on capital. Going one step further, some growth-oriented subsectors such as biotech were flat out taken to the woodshed over the course of 2016, thanks to the economic and regulatory uncertainties stirred up by the rancor of presidential politics.”

This, however, doesn’t mean growth should be ignored, but rather, investors must get strategic.

“The point is that investors arguably shouldn’t initiate a new position in a growth-heavy equity in the midst of a politically charged market, without a well-defined major catalyst firmly etched into the calendar,” Budwell noted.