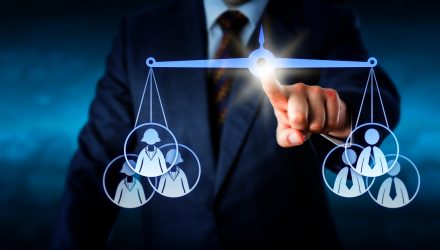 Equal weight, the index methodology that assigns approximately the same weights to all of the benchmark’s components, is one of the oldest iterations of smart beta and remains popular with advisors and investors today.

The biggest and most popular ETFs on the market largely include those that track traditional market capitalization-weighting methodologies, or they weight component stocks based on the companies’ market capitalization, so bigger companies have a greater say in the direction of the overall ETF’s performance.

In contrast, an equal-weighted indexing, like its naming suggests, would equally distribute the weight among all company holdings within the index, regardless of the market cap of each company.

“An alternative to market-cap weighting is equal weighting.  If this index were reshuffled into an equal-weight structure, Facebook — just like each of the other holdings — would have a 3.85% weight in the index,” said Invesco in a recent note. “If that were the case, Facebook’s late July loss would have had much less of an impact on the overall index. The index would have fallen 3.23% from July 25 to July 30, with Facebook representing 25.41% of that loss.”

Another Idea for Equal-weight ETFs.