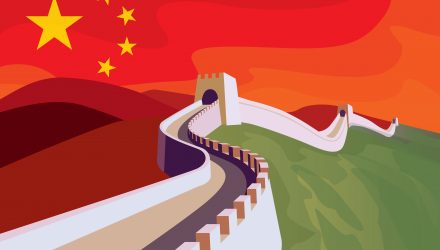 ETF Trends caught up with Rob Bush, head of U.S. Product Strategy and member of the DWS Research Institute, to discuss China’s economy and Chinese A-Shares.

Rob, China, despite being the epicenter of the virus, seems to be holding up relatively well. Why do you think that is?

Well, in terms of holding up well, let’s put that in context. The CSI 300, the main benchmark for yuan-denominated, onshore Chinese A-shares that trade in Shanghai and Shenzhen, effectively the S&P 500 of China, is still down around -6% year to date. But, yes, that does compare pretty favorably with a swathe of other developed and emerging equity markets, including of course the US. It may be somewhat spurious to claim that we can say definitively why that’s the case, but here are a few reasonable arguments. Firstly, that the type of stringent measures that China put in place to curb the spread of the virus were actually the tough medicine that the market needed. Secondly, it’s easy to overlook the fact that, although China is a huge exporter, still the vast majority of the CSI 300’s sales (c.86% according to FactSet) come from the domestic market. So, it’s arguably more shielded from closed borders and travel bans than we might believe. Thirdly, the Chinese market has a natural support in the form of its difficulty to short, and, finally, of course, it’s possible the market is simply telling us that the economic fallout in China won’t be as bad as it could be in some other countries.

When will we know more about how badly the economy was impacted?

We just saw, on 16th April, an historic Q1 GDP number of -6.8%, which was notable for a number of reasons. First of all it is, according to FactSet, the first time that we have had a negative print since China started to report GDP on a quarterly basis back in 1992. Secondly, it came out below consensus, and while it’s clearly a poor, and even alarming, number on the face of it, I do think that it shows the type of frank assessment from policymakers of the impact that the virus has had on the Chinese economy that the market was expecting to see. That said, we still think, as a firm, that China will grow by around 2% this year. Markedly lower of course than the type of growth rates we are used to seeing, but still positive at least. Additionally, we saw higher unemployment, and negative prints for retail sales and industrial production, so the overall message is poor from an economic perspective, though there are plenty of levers that Chinese policymakers can, and will, pull to try to reverse that, just as we are in the US.

As providers of the largest and most liquid China A-share ETF in the US, ASHR, what are some of the key insights you can provide for us?

Well, as it has done before, notably in the A-share selloff in the summer of 2015, our flagship China ETF, ASHR, which is, as you rightly say, the largest and most liquid product in the marketplace, proved that it can once again become a key price discovery vehicle. So, over the lunar New Year in China, when the market was closed for an additional day over virus concerns, ASHR continued to trade in on orderly manner in US hours despite the underlying market being closed. What that means is that investors were able to express views on China in the normal way, which is a strong advantage of ETFs in general in our view.

The flow story has also been quite interesting this year. Before virus concerns really kicked in we saw sizeable inflows in to the fund and then, once the Chinese market sold off, and yes, unfortunately, after the fact, we started to see some significant outflow. And that outflow really started to coincide with a recovery in the A-share market, at least from the lows it had hit. So, the message, I am afraid, is that this year the timing of the trade was not good. It really adds a lot of credence to the long run argument for establishing a strategic holding in China and, yes, perhaps, making some minor changes to that weight on a tactical basis, but not wholesale switching into and out of the asset class.

Do recent events change your view on China A-shares as a long run strategic component of a well-diversified portfolio?

Not really. In fact you might even argue that the price action this year so far strengthens the case for having diversified holdings. It has to be true that, with China down far less than the US, investors would have been better off from a return perspective had they been invested in China in addition to their US and other developed markets holdings year to date. But the long run case for holding China isn’t really about this year, it’s about owning the second biggest equity market in the world, in an economy that, not far from today, will become the world’s biggest, and, at the same time, having it act in a relatively uncorrelated way to some of the other major equity markets. That’s a potent recipe, and one that this year’s gyrations don’t change in our view.