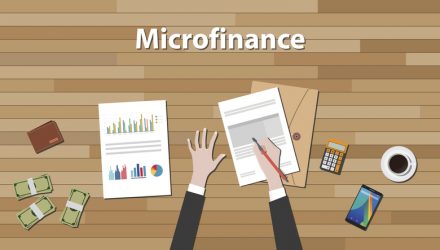 By Eric Dutram, Contributor for DWS

Are You Familiar with the SDGs?

Otherwise known as the United Nation’s Sustainable Development Goals, it is a collection of 17 big picture ideas for the nations of the world to achieve by 2030. The goals were unanimously ratified by all 193 member countries and include objectives ranging from “zero hunger” and “gender equality”, to ideas such as fostering more responsible consumption and production and building more sustainable communities.

While the best ways to reach these goals is debatable — and may largely depend on which SDG is in focus — several on the list have a direct financial component. As such, they may be achievable with the help of financial solutions.

One way to potentially achieve many of these goals, in our view, is by democratizing the world of banking via microfinance.

Broadly speaking, microfinance is providing financial services to low-income households and informal businesses. Part of why this is so vital in rectifying poverty-related problems is that there is a vast number of people around the world who do not have access to capital in ways that we take for granted in the United States and elsewhere in the West. In fact, almost half of all working age adults around the world—roughly two billion people—have no access to financial services.[1]

This illustrates why small loans—in the neighborhood of $2,500 or less—can have a truly transformative impact. This may be particularly true for those who have no other access to credit, or live in areas where per capita incomes do not eclipse that number in a year.

Despite the potential societal impact, microfinance is by no means charity. Default rates are quite low—in the range of 0.1-0.6% — and largely comparable to BB-rated assets.[2] Microfinance also may offer low to negative correlations with traditional equity and bond asset classes, as has been the case for the past two decades. Moreover, in a world where close to $9 trillion in negative interest rate bonds exist, this growing sector could represent a potential antidote to a low-rate world.[3]

Some are just starting to understand the power of microfinance and how it can potentially fit into a diversified investment portfolio. However, for us, this market is nothing new. Long before the SDGs were ever put into place, Deutsche Bank’s Sustainable Investments group, now a part of the DWS Alternatives platform, was the first major bank to deploy a microfinance fund back in the late 1990’s. Since then, we have lent more than $400 million to people in over 60 countries around the globe, impacting millions of entrepreneurs in the process.[4]

Our program has since expanded to include social enterprise financing, energy efficiency and renewable energy investing, and the Sustainable Investments group now manages more than $700 million in assets.[5] Still, microfinance remains a major focus in our efforts to address some of society’s biggest financial challenges in a way that can still be appealing to investors.

Our team believes that when it comes to investing today, it is important to promote a “triple-bottom line” which takes into account people, planet and profits. We can’t think of a better way of doing that than by taking action to achieve the UN’s Sustainable Development Goals over the next decade by advancing financial inclusion across the world.

2. Source: Symbiotics 2018 and DWS 2018. Past performance is not indicative of future returns